Eyes on Me and Honey Catch #reviews #webcomics #mustread #BL

The popularity of webcomics has increased in recent years. Most entrepreneurial artists can’t rely on the traditional publishers to build a name or find recognition and are forced to go it alone. It’s no different than any other type of indie publishing; many gifted writers are ignored or passed over by agents as are musicians. But, with computer technology, the face of publishing has changed and will continue to do so in the future.
What I find fascinating is the level of talent. There are so many gifted people out there. I used to be an artist and pianist, but those talents fell to the wayside for years because life got in the way—not to say that’s a bad thing. But now I’m rusty, and I’m trying to revive the talent I have. And you know what that means… Practice makes perfect. *As I bang my head against the table*. Anyway, I’m old school. The mediums I use are charcoal, pencil crayon, ink, et cetera. My better half bought me a Wacom pad. However, I’m a long way off from creating anything noteworthy.

I also believe it’s imperative to support my fellow writers/artists. I have accounts at Renta!, Lezhin and Tapas. Renta! is dedicated to manga writers/artists: love, yaoi, romance, shojo, Tatecomi and men. Lezhin and Tapas offer a good mixture from comics to novels. I’ve read a shit ton of stories on Renta! and, quite a few on Lezhin, but I’ll leave those reviews for another time. Today I will start with Tapas, since I recently joined and my “library” is small. The titles I’ve chosen are both BL. However, I will read anything.

Eyes on Me by Loonytwin is a story about Evan (blond) who forgets his keys at his friend Andrew’s place and when he picks them up a hot guy by the name of Marcus answers the door. Evan is taken aback by Andrew’s roommate and his lack of clothing. Marcus is a big tease, and he immediately finds Evan an appealing target. The story is a slow burn as Evan and Marcus gradually become acquainted. It’s obvious Evan has issues when it comes to dating and is leery of Marcus and his intentions, even though Marcus tries to reassure him.
The story is still in its infancy, so there is a lot of ground to cover, both plot-wise and with character development. However, at this point, even though EOM is simplistic, the author has laid a solid foundation. Her art is eye-catching, the dialogue well thought out and Evan, as one of the leads, is playfully endearing. Loonytwin has the facial expressions down pat and Evan with his emotionally charged personality is adorable. I’m sure as time goes EOM will become that much more of an engrossing read. The plot doesn’t have to be convoluted to ensnare the reader, a story can be character-driven, and that’s how I feel about EOM. At this point, it seems more character-driven with the storyline playing second. I can’t wait to read more! Love it! 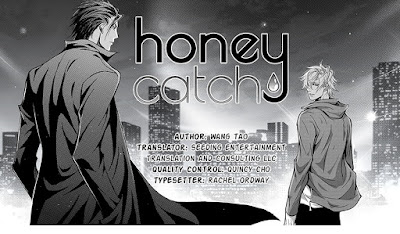 My second choice at Tapas was Honey Catch by Wang Tao. Honey Catch conjures up an entirely different atmosphere in comparison to the happy-go-lucky feel of EOM. It gives off darker vibes and right from the first page. Even the art, although equally as good, is ninety-nine percent black and white.

Chu Lin was sexually assaulted by a group of older girls at fourteen, an incident that leaves him psychologically scarred and, a mess, as he gets older. He can’t cope with relationships; he doesn’t know what real love is, but isn’t averse to falling in love. For him, getting there is the battle. Then one day, his whole life falls apart (loses his girlfriend, job and home). He gets drunk and meets a stranger, Ziming Liang. Ziming is a rising star in the fashion industry, where Chu Lin is lost and uncertain of his future. Ziming Liang takes him home and tries to have his way with him. But he quickly retreats when he realizes he might fall in love with Chu Lin; a rule he’s never broken. He’s gay and every partner is only good for one thing, sex. Chu Lin comes across as feisty and spirited, but underneath he's shy and lacks confidence. Where the seemingly unfriendly Ziming Liang puts on the “tough act”, but has an undaunting kind streak. As time goes they inadvertently build a relationship. But the question is… Where will it take them?


Honey Catch takes off from the first page. It’s strong characters, emotive dialogue, beautiful art and plot twists kept me reading. The story is far from over, and I can already feel the tension building—thanks to a few outside characters and two subplots the story could go in any direction. At this point, I fear for Chu Lin. And my only hope it that Ziming Liang doesn’t fuck things up (excuse my language). Because I can see with the way the author has constructed the story everything can easily go wrong, very fast. Needless to say, I love the drama and the tension it’s created. Honey Catch is excellent so far! Can’t wait to read more!

*All images are copyrighted by their respective owners and are only used as a visual reference. If you want to read these webcomics click on the links provided in this post. Remember to support the artist!