Manga artist and author Riyu Yamakami’s work was first published in the mid-nineties, and since she’s created roughly fifty-five plus manga. Her artistic style is distinctive and may not necessarily be to everyone’s taste, but she has produced a number of good stories. I found it difficult to choose, but there are three that have stuck with me as personal favourites. 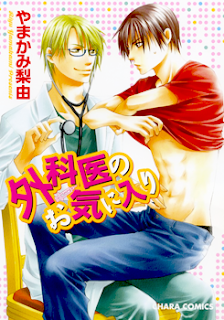 1.     In the yaoi Gekai No Okiniiri or My Favourite Surgeon, Mashiba, a surgeon from the university hospital is on the street when he hears beautiful music. Captivated, he follows the music to an open window where he sees Toshiyuki, a piano teacher, in the middle of practice. He loves the music and decides the teacher isn’t bad either. Toshiyuki threatens to call the police as Mashiba climbs through his open window. But Mashiba assures him he’s just an admirer of the music. Mashiba returns the following day bearing gifts so he can continue to listen to Toshiyuki play. The story begins with a simple enough premise (a chance meeting), however, it soon swells into considerably more. Toshiyuki struggles to live day-to-day thanks to a traumatic event he suffered in childhood, and Mashiba has to fight to prove he’s a man worthy of trust. Mashiba’s a bit of smartass, so I did question his sincerity in the beginning, but eventually I came to really appreciate him. 2.     In Tooi Nemuri or Distant Dream, Chizumi, the owner of a sweets company decides, after the death of his best friend, to adopt his son Ibuki. As Ibuki grows, he looks more and more like his late father Natsume, and in time Chizumi develops feelings for him. He can’t forget the love he felt for Natsume, and he can't help but project that love on to Ibuki. I know the plot sounds kind of twisted—a grown man falling for a teenage boy, but it isn’t exactly like that; there is significantly more going on. There is a third man Yatabe who is also friends with Natsume and Chizumi, and he shares a sexual relationship with Chizumi. Tooi Nemuri is a sad, but realistic view of unrequited love. But what makes it even sadder is that it takes Chizumi half his life to realize that he’s already got everything he’d ever need staring him in the face. He’s a good man, but too blinded by the past. Thankfully, at the end, his eyes are opened, and he learns to let go. 3.     In my opinion, Ms. Yamakami’s Saiaku na Rinjin or The Worst Neighbour, is her finest creation to date; I just wish it were longer or, better yet, it needs a sequel. High school teacher Hakura is a bit of an introvert, who wants nothing more than to lead a peaceful life. However, fate has other plans. His new neighbour Hashigami is none other than his high school nemesis—a seemingly heartless bully that loves to watch him squirm. I can’t stand bullies, but in the case of Hashigami I will make an allowance. Not every character is what he or she seems, and these two men hide their true personalities extremely well. Honestly, this is a great story. But if I say anything more I’ll ruin it. You’ll just have to read it yourself!