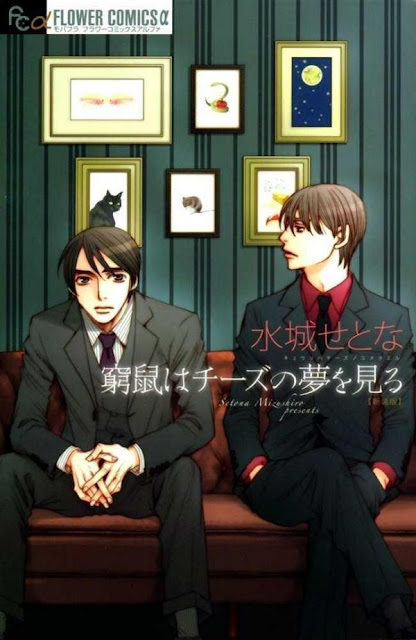 Kyuuso Ha Cheese no Yume Omiru or roughly, in English, The Cornered Mouse Dreams of Cheese by Mitzushiro Setona is a graphic, psychologically taxing drama that paints a very realistic picture of what can happen in a relationship between a gay man and a straight man when both have serious personality flaws—not to mention when the straight man has no interest in the same sex.
Kyouichi's indecisive, so he can’t seem to commit to any relationship and cheats regularly. Thanks to his adulterous nature, his wife hires a private detective to catch him in the act. The detective, Imagase, who turns out to be a college classmate he hasn't seen since graduation, shows up at the restaurant where he’s dining and reveals everything. Kyouichi is bewildered and begs Imagase not to tell his wife. Then Imagase proposes a deal. He won't tell Kyouichi's wife about the infidelity, but he demands: "I want your body in exchange..."
Unfortunately, this one incident sets the tone for the entire story, and in time these two men wind up in a very twisted relationship. I don’t mean kinky sex kind of twisted, I mean Imagase almost drives Kyouichi to suffer a nervous breakdown. Imagase wants Kyouichi so badly he can scarcely live without him, in yet in the same breath he doesn’t trust the man. So his emotional instability quickly becomes a double-edged sword.
Honestly, these two men drove me crazy. For most of the book, I was too upset to turn to the next page. Imagase is such a fuck-up in so many ways but also such a good guy. And Kyouichi just has no guts. In the end, they managed to work things out. 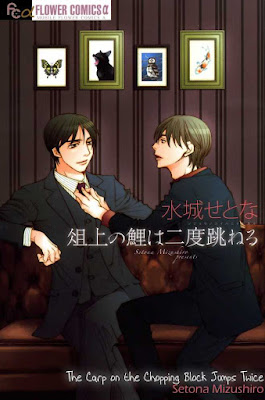 However, the sequel Sojou No Koi Wa Nido Haneru or The Carp on the Chopping Block Jumps Twice, paints an even darker picture, as these two men once again fall into disarray. But this time Kyouichi is a changed man. He’s no longer indecisive; he’s fed up with Imagase’s emotional battery, and the constant flitting in and out of his life. By the last chapter, I really believed there would be no HEA. I actually expected to be left feeling sick, but the author did an excellent job of erasing all my apprehension. The ending wasn’t blissful, but at least I felt satisfied that both men were in love, understood and respected one another. And most importantly, Kyouichi finally said his piece and revealed his true feelings.

I have to say the ending of the sequel is what did it for me. Five stars for both.