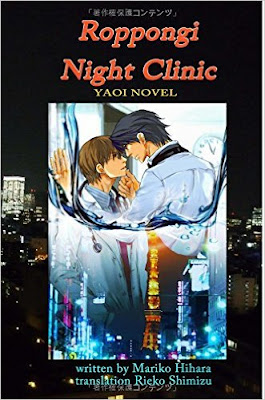 Roppongi Night Clinic written by Mariko Hihara is a gay romance novel that needs serious structural editing. Sadly, the author did almost everything wrong, which led to a stagnant plot and characters that rapidly lost their lustre.
Juan, the main protagonist, works in a club. He’s young, tall and handsome, and he possesses an extraordinary memory. One night, during work, Juan takes a man to the Roppongi Night Clinic for emergency assistance. Of course, this is where he meets Doctor Maki. Doctor Maki is the complete opposite of Juan, friendly but somewhat introverted. However, Juan is instantly taken with the man and proceeds to pursue him. Well, at least that is what Juan claims he’s going to do.
In romance, the main characters and their relationship should be the focus, but that isn’t the case with this book. Ninety percent of the story dwells on Juan’s past, mainly his ex-girlfriend, and his sexual exploits at work, which makes his attitude towards Maki, seem insincere. If Juan cared about the doctor, he wouldn’t continue to screw other people and then tell Maki about it. Basically, Juan’s life revolves around the club and everyone else’s problems, rather than building a relationship with Maki. Even the brief sex scene with the doctor is debased by an intrusive overlap of Juan’s memories. The entire story could easily be summarized in one chapter.


I did like the atmosphere of the Roppongi District—the street people, clubs, and gambling. The author drew me into a dark and seedy world where foreigners are expendable, and everyone hides when the police conduct raids. But that is as far as my “likes” will go. I hate to give such a low rating and such a poor review, but I just don’t feel this book is worth anything more than two stars: very disappointing. I do have the sequel, Roppongi Night Clinic 2, but I still haven't decided whether to read it or not.