Books Worth Reading! Both 5 Stars!

I’ve never read anything by this author, so I took a chance and was pleasantly surprised to find this book a perfect choice. Malina Tarver wants nothing more than to have a normal life, and Orlosian warrior Asriel is sent to earth to watch over her. Even though the main characters have contrasting personalities, they still manage to compliment one another. And as their relationship grows so does the intrigue. Calm Assurance is a paranormal romance worth reading.

I like a well-written book that can appeal to a broad audience, and Destiny’s Favor is an excellent choice. With romance, drama, mystery, suspense, action and a touch of the supernatural, it drew me in and kept me reading right to the last page. Japheth, a vampiric type being, defects from his people to find his soul mate. It can’t get any more romantic than desperation brought on by unrequited love and decades of yearning. This book is a wonderful follow-up to Calm Assurance. 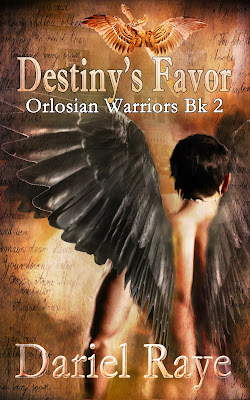 His world shifted the moment she was born. Now, nothing can stop him from making her his. 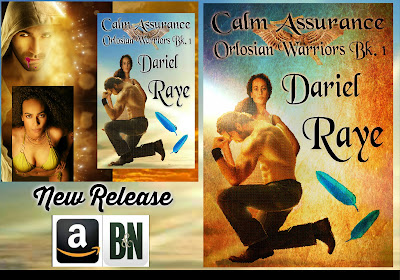 When Asriel - Orlosian Warrior, descendant of Nephilim, law enforcer – is sent to guard Malina, a human with a penchant for drawing trouble like a tornado, she becomes his obsession.

With no hope of finding love in his dimension, he breaks the cardinal rule, leaving his home to protect her, but she has also drawn the attention of his enemies, and he is forced to face demons from his past. If Asriel chooses to stay with Malina, not only does he risk forfeiting his right to ever return to his dimension, but he will need her blood to survive.
Amazon | Barnes and Noble 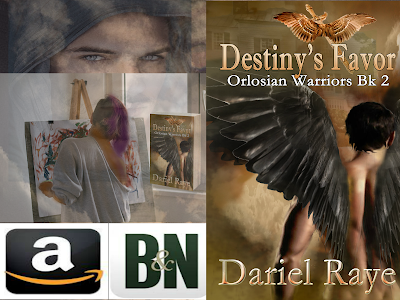 Excerpt from “Destiny’s Favor: Orlosian Warriors Bk.2”
Caught in a Kiss
As soon as they left the room, Destiny removed her hand from his and reached for her book. She gave him that suspicious look again, pursing her lips before she spoke. Sitting in a chair directly across from the sofa, she narrowed her eyes and openly asked, “What is it about you that sets me on edge?”
Japheth lifted one corner of his mouth. Charming. This little female continued to challenge him. “You tell me. Can you sense that we are connected?”
He crossed his arms, taking special notice of the quickening of her heartbeat and imagined her luscious chocolate nipples tightening to taut buds just waiting for his tongue. He braced himself for the lie, her sweet scent of arousal even stronger now.
“You and me? No. I’ve never met you before.” And there it was, right on cue.
She placed the book on the table beside her and stood, her expression daring him to come closer. “I don’t think Robert would like…”
The air shifted with her movement, and Japheth closed his eyes briefly, basking in her scent. Just one taste. He opened them, moving toward her. “Robert. You’re not going to say anything to Robert. If I decided to take you for myself right now with Robert in the next room, he would be the least of my problems. Whether or not we’ve met before has nothing to do with our connection.”
Destiny glared at him and took a step back. “If you decided to take me?” She pointed her index finger at him as she continued. “You listen to me, you arrogant bastard, you don’t decide to do anything…”
J narrowed his eyes and took another step toward her, closing the distance she’d tried to put between them until he was mere inches away. His conscience, long quieted into silence, balked at the idea of entrancing her and taking her so far from Robert she would forget he existed. There was something about her that made her willingness to be with him more important than his desire for her. Her wants and needs took precedence over his own. He shook his head, silencing his conscience again.
Destiny stumbled forward, an apparent moment of dizziness, placing the index finger of her right hand at her forehead and the palm of her left hand on his shoulder to steady herself. She blinked several times, her dark lashes appearing to move in slow motion, and looked into his eyes as if seeing him for the first time.
J wasn’t sure what was happening. He hadn’t done anything to entrance her. He had wanted to, but he was certain he had restrained himself, yet she tilted her head up and kissed him. A mere brush of her velvety-soft lips sent a spark of possession through his entire body. He gripped her upper arms, dragging her body against him, and deepened the kiss.
Seekers. He couldn’t shake the feeling that they were getting closer this time – that his contact with Destiny would make him and her easier for them to locate. His feelings were always right.
He loosened his grip, allowing her to step back. The fact that she had already been attacked at least twice meant his enemies had found her. Although she had not described her attackers, J knew that the same evil creatures he had decimated at the bus station had attacked Destiny before his arrival. He had quickly wiped Destiny’s memory of the attack as well as Robert’s, but to his surprise, guilt twisted inside him. He did not like wiping her memory or altering her in any way. Her connection to him placed her in danger, and he wanted her to fully understand whatever decision she made.
She stared into his eyes. “Oh, I, um, that’s not what I, I mean, I didn’t…”
Destiny’s gaze shifted slightly, and she took in a sharp breath.
J frowned, clenching his jaw before turning to face Robert. Dammit. His heart plummeted when he saw her reaction. He had sensed the moment Robert awoke, but Destiny commanded every bit of his consciousness. She was all he could think about, and he needed her away from Robert. He also didn’t want her hurt in any way. He felt her pain and confusion, the new sensation throwing him off balance for a moment. He had always known he had the ability to feel another’s emotions, but until now, he had never allowed anyone to get close enough.

About the Author
Dariel Raye is an animal lover, musician, and author of powerful IR/MC (Interracial/Multi-cultural) paranormal romance and dark urban fantasy with alpha male heroes to die for, and strong heroines with hearts worth winning. She is a mezzo-soprano who fell in love with books and started reciting stories at the age of 3. She also plays over 11 musical instruments.
Her stories tell of shifters, vamps, angels, demons, and fey (the Vodouin variety). Dariel is currently writing three series: “Dark Sentinels” (wolf shifters), “Orlosian Warriors” (Vampire-like Nephilim), and “Gateway” (a crossover erotic paranormal suspense with romantic elements).
For more about Dariel, follow her blog or visit her website. She also publishes a new release newsletter. If you enjoyed this book, please post a review on review sites and follow her on Amazon. You can also follow her and contact her on Twitter, Facebook, or Pinterest.