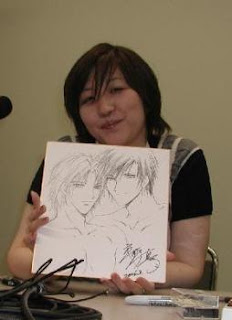 Makoto Tateno also publishes under the pseudonym Shinjuku Tango. She’s a prolific mangaka and, to date, she has created 30+ series of manga in the shoujo market, mainly in the BL genre. But, she is probably most well known with her English-speaking audiences for her yaoi series Yellow that was published by DMP. Her debut was in 1986 with a short story titled Yuraete Tamago Boys, which was published by Hakusensha and serialized in the magazine Hana to Yume.

I’ve read most of Ms. Tateno’s work, and some of my favourites are: Yellow, Hero Heel, A Murmur of the Heart, A Waltz in the Clinic, Romeo x Romeo, and the one shot Warui Yume (Bad Dream). Of course, she has a signature style that any yaoi enthusiast can spot a mile away. But what I love most is her ability to tell a decent story. Some mangaka’s, just like traditional authors, rely more on character development, and they’re very good at it, however, others are great storytellers. And Ms. Tateno has a knack for pulling the reader in before they realize what’s happened then they’re hooked. 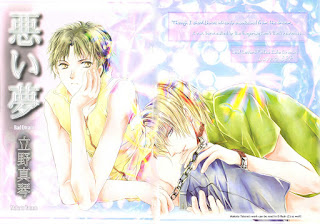 I don’t generally review one shots, but Warui Yume hit a nerve and left me with a bittersweet taste in my mouth. One day, out of the blue, Satoru tells his long time lover and flat mate that he wants a change of scenery. Basically, he wants them to go back to being friends without giving an explanation. His lover Kazu doesn’t bat an eye and agrees to his terms. And, from that moment on, the idiot seme Satoru, who is extremely self-centered, gradually begins to regret what he did. In thirty-three pages the uke Kazu gives his ex a taste of his own medicine. I really like Kazu, and give him kudos for putting up with the crap he did. I don’t care for how these two treated one another, especially Satoru. But, then, having been in a similar situation in my youth, I can relate. Five stars! 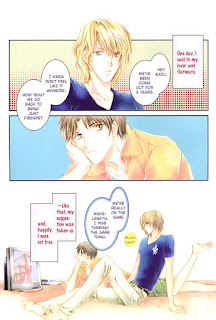