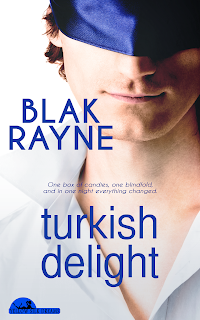 ‘One box of candies, one blindfold, and in one night everything changed.’

Thanks to a rough break-up, computer programmer Leonard’s been miserable for months. He’s the first to admit, he picks partners based on what he sees. Which, according to his brother Nate is his biggest downfall. To prove a point, Nate forces him to attend a night of blindfold speed dating. The men are plentiful, but making a choice goes against his superficial nature.
As the evening draws to a close, he meets a man who breaks all the rules. He gives Leonard a kiss and only one solid clue to his identity before disappearing. Days after, and Leonard still can’t get that kiss out of his mind. But without a name or face, he holds little hope of ever finding the man.

The Jeep hit the curb with a jolt. He shut the engine down and I got out. Head back, I stared at the night sky, snow wafting through the air, landing on my face and terra firma, the cold biting at my cheeks and nose. The whole area, a city block, was desolate and had an eerie silence about it.
“Well, we’re here.”
“And what is here?” I stood beside him, exhaling white puffs, my hands sunk deep in my pockets.
“Your Christmas present.” He gave a nod towards the commercial building in front of us. A large red sign with white letters graced the front of it.
“Blindfold Speed Dating! What the—”
“You don’t know until you try.”
“This is where you brought me? Seriously? The gay end of Vancouver for an evening of speed dating?”
“Yep, that’s what an older brother is for. Merry frigging ho-ho!” Nathan tugged down on my shirt, straightening it like our mother used to do when I was a child. Then he adjusted my tie and jacket, smoothing and pulling here and there. “You’ve got a stain on your shirt,” he griped, trying to tuck the hem in under my waistline.
“Come on, I’m not a kid!” I grabbed his arm and removed it from my slacks.
“You look like you rolled out of a dumpster.”
“I like dumpster diving!”
“Grow up.”
“I’ve never done anything like this,” I whined.
He grabbed my wrist, turned my forearm underside up, and slapped a glossy piece of paper the size of a bookmark on my palm. “Cheer the fuck up and live a little.”
“But speed dating with a blindfold? Sounds a little too noir for my taste.”
He sighed, spun me around with more force than necessary, and pushed me in the direction of the entrance. “I’ll be back to get you at eleven.”
I dug my heels in, he bumped into me, and we slid across the sidewalk. “Nate, you know I’m not good at anything social.”
He barked like our dad, “Move! And don’t you dare skip out. Because I’ll know.” He made the I’m watching you two-fingered gesture several times.
I shook my head, shoving him away. “You’re such a jerk.”
“Anne and I bought you the ticket because we didn’t want to see you alone. No one should be alone at Christmas,” he said with finality as if it was the last time we’d see each other.
Scrunching the ticket, I glared at him, wondering where the hell he’d gotten the audacity to play Cupid. “Great. Got it.”
He got in the Jeep and waved before accelerating away.
Teetering on the edge of the sidewalk, I shook a fist. “Asshole!”
When I stopped my verbal assault, I realized how quiet it was. The snow had deadened the landscape like an invisible force field keeping the rest of the city at bay. Vancouver Village was a long way from home, especially when I didn’t have my car.
Light shone through the large windows, glistening on the freshly fallen snow. White settled in a lacy pattern on my clothes. I opened the door to the low decibel of male voices and a man wearing a badge that said, Gary–Coordinator.