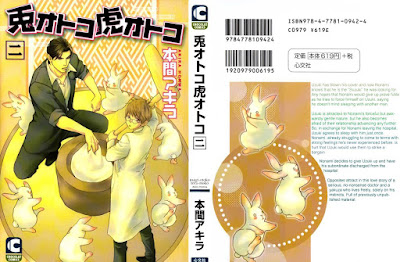 Usagi Otoko, Tora Otoko or Rabbit Man, Tiger Man art and story by Akira Honma is a romantic comedy at its best. And a yaoi I wanted to review just for the sake of sharing because it’s good, really good. 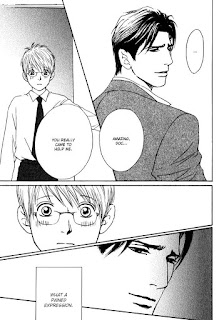 Doctor Uzuki works out of a university teaching hospital. One night on his way home he comes across a man shot in the shoulder. The man Nonami is yakuza, which makes the doctor nervous, but he can’t leave an injured person to possibly die. So, he patches Nonami, and then disappears into the night. At the time, probably due to his condition, Nonami misheard Uzuki’s name, and has mistaken him for a woman he believes is called Suzuki. With the help of a brother yakuza, he infiltrates the university hospital to find “Doctor Suzuki.”
There is another story, but it really does play second fiddle to the Uzuki and Nonami’s relationship. The handsome Nonami is a crazy sort of guy—somewhat eccentric and unpredictable, he has a tendency to yell when he doesn’t get the answer he wants. But underneath his gruff exterior beats a kind heart that gradually becomes ensnared by Uzuki. And it’s the way he falls in love that makes him irresistible. Uzuki, on the other hand, is timid, intelligent, and patient, a real adorable uke, and a perfect match for Nonami on every level. 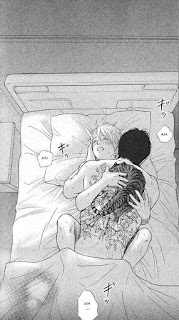 I mentioned this yaoi is a romantic comedy, in which some moments are definite “laugh out loud” quality and others are incredibly romantic. And the author does a superb job with art; she has created one of the longest and most beautiful love scenes I’ve come across. I would rank this yaoi equal in caliber to Eda Yuuri and Machiya Hatoko’s Koi to wa Yobenai (You Can’t Call it Love); great characters and an interesting story with loads of emotion. I know the bad boy yakuza has been done to death, but in the case of Rabbit Man, Tiger Man the bad boy Nonami’s unconventional outlook makes him unique. This yaoi is a definite “must read.” I look forward to purchasing additional works from Akira Honma. Five stars!