I decided to compile a list of all the mangakas I’ve read, and I can tell you right now although some are missing it’s still a bloody long list. Basically, I read all the time and of course a new author will crop up (well, a new author for me) and spark my interest. Anyway, I discovered another one and her name is Kotesuko Yamamoto. 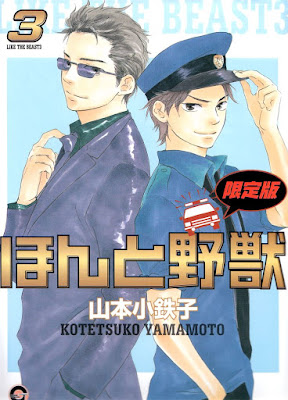 25. Most yaoi enthusiasts enjoy a good “cop with a yakuza” story, and one such manga series is Honto Yajuu, a romantic comedy by Kotesuko Yamamoto. Polite and good-natured police officer Ueda Tomoharu mans a local koban station. He’s happy with his occupation and leads a relatively quiet life until he runs into yakuza Gotouda Aki while chasing down an underwear thief—actually, they both chase the guy, but for totally different reasons. The day after Aki suddenly confesses and gives Ueda a present then he starts to hang out at the koban station until Ueda agrees to go out for dinner with him. What makes this story a real gem is the roll reversals. Aki is supposed to be this tough yakuza but underneath he’s a jam tart and probably one of the sexiest ukes I’ve come across in a long time, totally adorable, and he goes after Ueda instead of the other way around. And don’t be fooled by Ueda’s kind façade, he’s the pervert—a big strong sexy perverted seme. The characters are unique and endearing. Ueda’s personally is especially refreshing. He isn’t scared to date a criminal and that’s what really makes this story fun and different from most “cop yakuza” yaois I’ve read. Normally, it’s the other way around and cop is the uke fearful of dating outside his comfort zone. No matter what happens, Ueda is there for Aki, and even meets his family. I love this series and highly recommend giving it a try. 26. Us, Blooming is a short story from a compilation of one shots titled Koi To Wana by Kotesuko Yamamoto. The same characters Takashi and Haru from Us, Blooming got their own series titled Mankai Darling or Full Bloom Darling, where their relationship continues for several years. Again, I suggest reading Us, Blooming first because the one shot provides character history as well a wonderful story that is sure to hit anyone's soft spot. 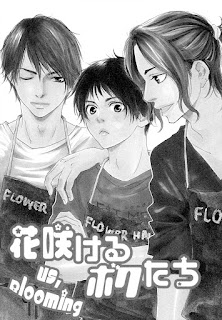 From Us, Blooming: Haru owns a flower shop and he spots a teenager, Takashi, spying on his employee Ryou. Ryou gives Takashi a potted plant to cheer him up, and then Haru offers the teen a job. Takashi believes it’s his chance to get closer to the pretty Ryou, but the store manager has other ideas. I really loved this short. It is another gem—decent plot, interesting characters—an all around heart-warming and absorbing read. And Mankai Darling is just as good. Sadly, I refuse to say too much about it or I’ll spoil the entire plot. But Takashi goes through a number of growing pains as his relationship literally blooms, and a new character is introduced.