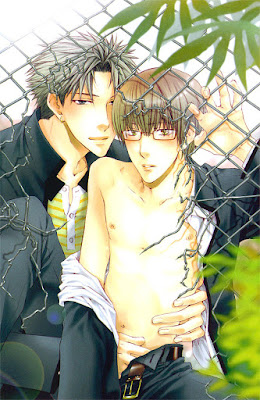 Nekota Yonezou’s Hidoku Shinaide/Treat Me Gently is eerily similar to Madarame Hiro’s Kawaii Akuma/Cute Demon, both authors used the same trope, one which is quite prevalent in yaoi: boy wants boy and rapes him because he doesn’t have the balls to say it or act in a respectable manner, and after months of sexual assault, the victim eventually falls in love with his attacker…. 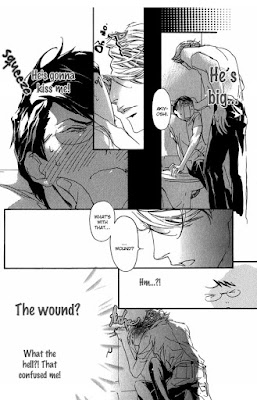 Okay, folks, I’m not into BDSM or anything even remotely sexually abusive, and I don’t really care what two consenting adults do in private, but rape is rape. Period. And rape does not constitute love. Sorry, but all the sickos out there who think they can just force someone to their will because they’ve got it in their mind it’s “okay”, nah-ah, it don’t work that way.
This is one yaoi trope I cannot stand, and I’ve read so much of it, I want to hurl. I think I’ve only come across one possibly two yaoi where the victim actually fought back and the perpetrator got what he deserved. In real life the victim does not ride off into the sunset with his abuser. *kisses and hugs* ‘Oh I love you!’ And that’s why I have a hard time swallowing these type of stories, even though there have been some truly bizarre real life cases, where the victim (usually a child) refused to escape even when an opportunity presented itself. 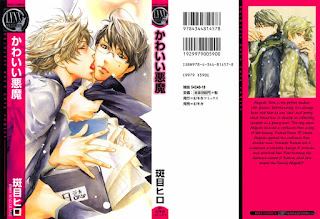 Anyway, that’s where these yaoi begin, but thank God it’s also where the similarities end.
With Madarame Hiro’s Kawaii Akuma, I was disgusted from the first page to the last. Aside from questionable artistry, the attacker/seme Naruse Fuuta is an arrogant, rich, spoilt, borderline mentally deranged and an extremely abusive asshole with no redeeming qualities whatsoever. He’s cute in the beginning with his big puppy eyes and sweet façade, but turn your back and wham! Seriously, the character is despicable. Just when I thought I’d read about every badass seme out there, this one takes the cake. At least Ayano Yamane’s Asami Ryuichi has half a heart, and Claus in Maiden Rose realizes he’s a rotten bastard in the end and tries to repent. A bit of an exaggeration, but you get the drift. Naruse confesses to a cute boy in school, Akiyoshi Tooru, who refuses his advances, then he goes berserk. He literally repeatedly assaults Akiyoshi physically, mentally and emotionally for months. Goes on summer break, returns, and is twice as big, stronger and more of prick than before. And Akiyoshi is the worst uke, a spineless wimp. I get it, he’s scared, hell I would be too in his position, but then he falls for Naruse…? In some demented way, these two guys deserve one another.
This yaoi is just so over the top, I can scarcely decide on an appropriate rating. It’s difficult to find any good qualities when the bad looms like a massive storm cloud. So, I give it two stars, for the fact that Madarame Hiro had the guts to push an old trope to its limit. 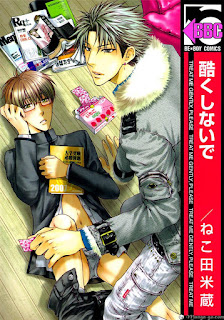 Treat Me Gently by Nekota Yonezou starts virtually the same. Maya sees Nemugasa cheat on a test, something he’s never done before, and in exchange for keeping the secret, he tells Nemugasa to take off his pants (blackmail on top of assault). Maya does take advantage of the situation, forcing Nemugasa to have sex with him. But here’s the difference, Nemugasa isn’t such a pushover and Maya’s bullying isn’t near as horrific as Naruse. Most of the sexual interaction happens outside of school, in private. Another point I found intriguing was how Maya used lubricant; rapists don’t generally give a shit whether they inflict pain.
Maya does truly care about Nemugasa even though he picked a horrible way to show it. Once they get over the bullshit misunderstandings, Maya becomes a doting seme, and he does eventually apologize. It takes Nemugasa a long time to forgive him, but in the end they wind up in a long-term faithful relationship that spans into college. Treat Me Gently was touching in parts and I got a real sense these two young men cared about one another deeply.
This yaoi certainly had its flaws, and I didn’t care for the nonconsensual sex, but at least the plot development went well beyond abuse and control quickly; Maya and Nemugasa evolved. So, I give this one four stars. Now, I’m going to wash my eyes out and read something completely different. :P
Happy Yaoi Hunting!