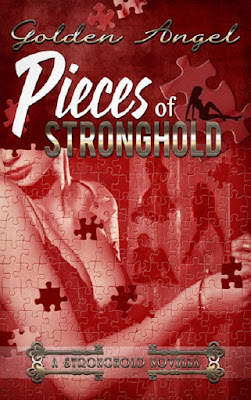 The Stronghold Doms and their submissives are anxiously watching as Jared and Leigh, both on the rebound from seven year, emotionally turmoiled, relationships take the first tentative steps towards something more than friendship. Leigh isn't sure she's a submissive, but she's intrigued and spending more and more time in the club. Jared isn't sure he can handle a relationship with yet another woman who can't fulfill all his needs, but he can't deny the sunshine that Leigh has brought back into his life.
With the past snapping at their heels, their friends worried about their futures, their choices could make or break the happiness of their entire group of friends.

Pieces of Stronghold is approx. 58,800 words long and includes a bonus mini-story that was released in a free newsletter for Christmas 2014 by YellowSilkDreams as a chapter from the point of view of Will and Gina.

"Did you seriously bring wine glasses?" she asked, voice quivering with suppressed amusement, but also that same awe that she'd shown over the cookies.
"What, you thought I was going to let you drink from the bottle like a heathen?" he asked, enjoying her answering giggle.
He poured the wine with a flourish and handed it to her, before pouring his own glass and finally accepting her offer of half the blanket.  Despite the layers they were both wearing, their body heat mingled fairly quickly, warming him even more than the wine did as the rich cabernet slid down his throat.  Leigh leaned against him, resting her head on his shoulder, and he shifted so that he could wrap his arm around her, tucking her against him in a way that made him feel like he was shielding her against all the elements.
"Thank you for all of this," she murmured, her head moving slightly against his shoulder.  "This is way classier than anything I would have planned for stargazing."
"Wine glasses have a way of doing that," he teased.

Looking up at the stars with her, he felt more lighthearted than he had in years.  More open.  More himself.  When was the last time he'd really had a conversation with someone that wasn't about either them or Marissa?  It felt like his life had revolved around his ex's problems and drama for so long, he could barely remember who he was without them.  Until now.  It was hard to look up at the nighttime sky, filled with stars and galaxies, and truly feel that the trivialities Marissa had cluttered his life with really mattered at all.
"I can never stargaze without thinking about how small we are," Leigh murmured, echoing his thoughts, her head tilted back as she scanned the stars.  "Like, look at all those billions of other stars, where there are other worlds... all those galaxies that we can't even see.  We're just a teeny tiny speck... kind of makes me feel pretty insignificant, you know?"
"Ever wonder if there's really alien life out there?" he asked, curling his fingers around her shoulder in a comforting kind of gesture.  Thinking about how little they were in the grand scheme of things was never a comfortable thought and, despite the cold, he was pretty sure that Leigh's shivers meant she felt the same.  After all, as cuddled up as they were, with the blanket wrapped securely around them and wine warming their insides, the cold was barely touching him.  And he was wrapped around Leigh, which meant it should be effecting her even less.
"I mean, there's got to be, don't you think?  At least something, somewhere.  Maybe more advanced than us, maybe less... but I can't believe that we're the only planet in the entire universe to have any life."
"That's pretty much how I always felt."  Jared paused and then gave her a sardonic look.  "Do you believe in alien abductions?"
"Uh, not so much- oh look!"  Leigh jumped excitedly, her arm swinging up and nearly knocking against his wine glass.  He followed the point of her finger in time to see the very last flash of a shooting star.  "It's starting!"
They both paused, scanning the sky, as if the one star was the signal for a multitude.  Of course, meteor showers didn't work quite like that, especially the Geminids, which weren't quite as showy in their area as, say, the Perseids in August.  But that didn't stop them from hopeful looking.
Finally, Leigh sighed.  "I think that might have been it for now." She tilted her head to look up at him, her voice turning hopeful and kind of pleading.  "Cookie?"
Jared couldn't help but chuckle.  He reached out from the warm cocoon of the blanket to knock the top off of the tin and pick a cookie up for her.  Before she could shift to reach for it, he brought it to her bowed pink lips.  Warmth that wasn't at all physical shot through him as Leigh delicately took a small bite, happy to let him feed her.
The warmth spread down his body, pooling in his groin and making his dick start to harden.  He'd always found feeding a woman to be an erotic experience, one that went far beyond providing for her.  Olivia had once told him that it was because he used food as a phallic substitute, but he didn't think that was all of it either.  There was something primal about feeding a woman from his own hand, a kind of dominance that was more mental than anything else.  After all, Leigh was perfectly capable of feeding herself, but here she was, allowing him to do so, without protest.
It wasn't sexual, and yet it turned him on anyway.


But that wasn't what they were here for.  Still feeding her bites of the cookie, he turned his attention back to the heavens.
Pieces of Stronghold: