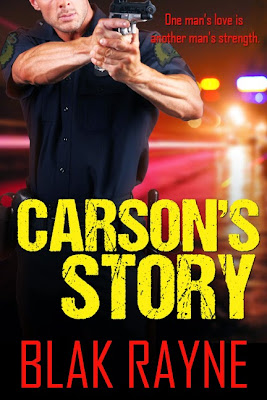 A twenty-year veteran of the police force, Carson Mackenzie has worked hard to carve his niche in a demanding environment where stress is the operative word. Thanks to his occupation, he’s never relied on anyone, not even his husband Stephen until he’s involved in a severe car accident while on duty one night. His recovery isn’t smooth; reoccurring nightmares of the crash play havoc with his mental health and he starts to experience a new kind of stress—something he’s never dealt with, anxiety.
Adding to his problems, Dudley Kramer corners him in a restaurant, a shady art dealer who almost ruined his marriage and career once before. Arrogant and self-serving, Dudley wants sex and he’ll do whatever it takes. Too ashamed to ask for help, he tries to handle the situation alone but quickly discovers the art dealer won’t take no for an answer.

Excerpt:
I put my hat on, tugged it down snug and got out of the car, violation pad tucked inside my jacket and sauntered alongside the SUV. The driver side window slid down as I approached.
“Officer, I’m sorry,” Stephen said, frantically digging in his wallet.
“Really.” I gripped the door, locking my arms and peered inside the vehicle. “Talking on your phone is illegal—actually operating anything electronic while driving is.”
He jumped, rolled his eyes and then snapped, “Very amusing, hon!”
“It wasn’t meant to be, Mr. Pritchard.”
“What’s with the formalities? You know who I am.”
“Yes, I do. But as a public servant, I have to act in a professional manner at all times.” I stood straight, keeping my left hand on the door. “Would you step out of the vehicle please, sir.”
“Step out.” He frowned. “What for?”
“Just do as I ask, please.”
Glaring at me, Stephen placed his wallet on the dash, grabbed the latch and bashed the door open; he was annoyed. “Well, I’m out of my vehicle…” He pretended to examine my embroidered name badge, flicked it, and stared straight into my eyes. “Constable Mackenzie. And I have a right to know what I’ve done wrong.”
“Hostility isn’t acceptable, sir.” I twirled my hand, gesturing for him to turn around. “Please put your hands on the hood of the vehicle and spread your legs.”
Stephen complexion went ghostly white, but his eyes shot daggers while he did as I’d requested. “If this is your idea of a joke, I swear the shit’s going to hit the fan.”
“No joke, sir. I just need to make sure you aren’t carrying any weapons.” I leaned against him, patting down his chest, then sides. His cologne smelled good and I almost kissed him. Breathing in his hair, I slid my hands lower.
“Right,” he sniped. “Weapons. Like I carry fucking weapons!” I felt the circumference of his slim waist and the downward groove of his narrow hips. He tensed when I touched his groin and said with dry sarcasm, “Well, you won’t find any weapons in there, officer.”
“You’d be surprised what lengths a person will go to conceal items on their person.” Forcing myself not to smile, I removed the handcuffs from my belt, clicked the first, tapped in on his wrist, locking it and of course, he freaked.
“What are you doing?” He tried to face me.
“I’m placing you under arrest, Mr. Pritchard.”
“Okay, Constable Mackenzie, this isn’t funny anymore—actually it never was!”
He fought me, but I quickly subdued him, securing the second handcuff on his other wrist. Other motorists on the road slowed down to watch, and he went red in the face, turning away from the traffic.
“What about my car! Oh my God, you are such a goof!” he complained loudly, as I walked him to the rear of my cruiser.
“There is no need for abusive language, sir.”
“I’ll give you abusive language, Constable Mackenzie! How about I get a fucking lawyer—how do you like that language? Huh?”
He continued to spew curses as I opened the back door and helped him sit. “Watch your head.”
“What about my rights?”
I shut the door and he yelled. Shaking my head, I went back to the SUV. Made sure to roll up the window and lock it, then grabbed his wallet off the dash and keys, which had been left behind. Back inside my cruiser, I removed my hat and updated my status. As I pressed the computer keys, I took note of Stephen’s scowling reflection in the rearview mirror.
“So what’s going on?” he asked.
“I just let dispatch know I’m taking a break.”
Stephen’s eyes widened and he barked, “Break? What the fuck!”
“Please remain calm, Mr. Pritchard.” I eyed him for a split second and turned onto the road.
“You know, Mr. Mackenzie,” he said snidely, “I think I might have made a mistake with you.”
“That hurts.”
“Well, what do you expect?”
“Have a little patience.”
He turned toward the window, grumbling, “My patience is wearing thin.”
The drive was silent. And I really hoped Stephen wasn’t too incensed. After twenty minutes, I parked the car and shut the engine down. We were in a densely forested area, well away from civilization. Staring in the rearview mirror, I removed my hat and tossed it on the passenger seat.
Stephen shifted forward and said through the tiny holes in the Plexiglas barrier, “Where are we?”
I shut off the radio, got out of the car, and opened the rear door before ducking inside to sit next to him. “I’ve fantasized about this for a long time.”
Stephen’s forehead wrinkled. “What?”