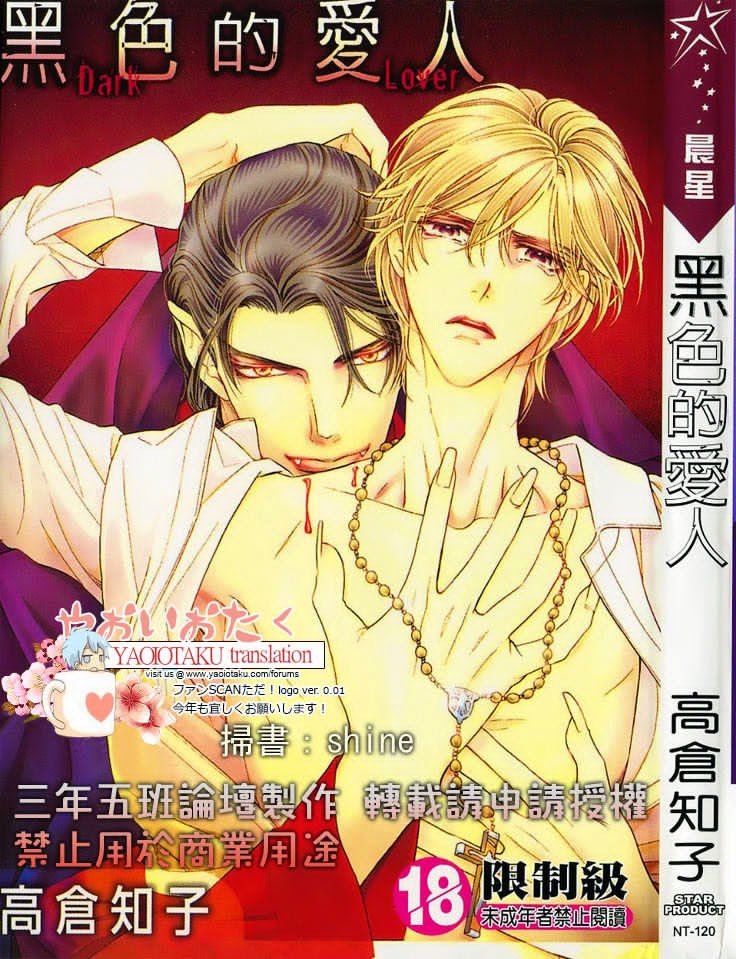 Rei runs away from his uncle's home and, during the night, he meets a mysterious man that promises him they will meet again the next time there will be a full moon. However, the kid is taken by the police and sent to an orphanage asylum. 10 years later, he meets the mysterious man again…

Yamiiro no Aijin or Dark Lover by Takakura Tomoko is an ongoing yaoi series classified as a romantic drama. As they say, first impressions are lasting, and my initial feelings were mixed. Rei runs away from his uncle’s home and meets a stranger who promises to return in ten years. The police catch Rei and take him to an orphanage and then, you guessed it, a decade later the stranger reappears. At the same time a vampire bites the priest who is in charge of the orphanage and then these vampire hunters come out of nowhere (with no explanation) and they drive a stake into the priest’s chest; a feeble attempt to kill him. Rei is in shock, of course, and doesn’t understand what’s going on. He overhears a conversation between the vampire hunters and discovers where the vampires may be hiding. Then he vows to avenge the death of the priest and drives to the supposed secret hideout, where he meets, I have to assume, the head vampire. Rei is a typical weak uke—big pretty eyes and soft waves of blond hair. He confronts the vampire and is promptly seduced, to put it politely.
The imagery seemed to lack somehow, like the artist was holding back, no oomph. And the plot was blown in the first few pages, depicted exactly as the back cover blurb stated, and I mean word for word, which added to a monotonous cliché of a vampire falling for that one special human that he refuses to kill. In my opinion the characters were flat, and I can’t say that the dialogue was that wonderful either. But, once I read the second book in the series, the old adage no longer applied. The story did show signs of improvement; I’d caught a glimpse of potential in the second part that wasn’t in the first. The author expanded the story by hinting at the characters personal histories, which was perhaps an indicator that there might be significantly more in the third book. And I hope there will be. Sex is great and almost a prerequisite in yaoi as with all erotic literature, but there must be a reason for it, just as each character must fulfill a purpose. As my editor told me: whatever is in the book should move the story along and if it doesn’t then remove it.
For me, it doesn’t matter if the story starts off slow or with an ambiguous edge or even a seemingly cliché plot provided it evolves and goes somewhere that makes sense. If you’re into vampires or the paranormal you might find this yaoi titillating. Dark Lover had a rocky start, and it wasn’t the greatest yaoi I’ve read or the worst, but it had potential. 3 stars!