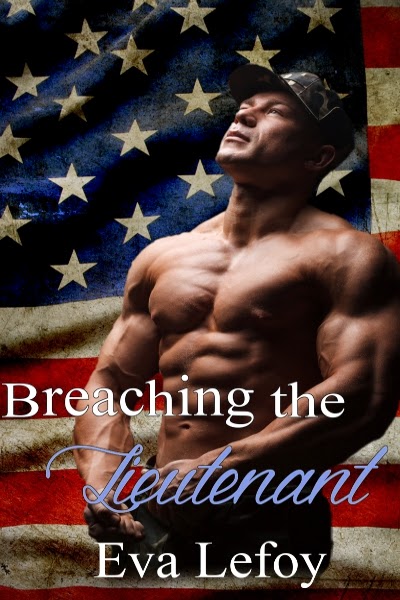 Breaching the Lieutenant
by Eva Lefoy

This is a short, explicit, M/M military erotica read and I guarantee you’ll  never think of a mechanic’s wrench the same way again!

Second Lieutenant Mark Oates has a lot to learn, both about the U.S. Army and about himself. When a senior officer confronts Oates about his latent homosexual tendencies, he’s backed into a corner and only one man can help him out. Trouble is, can he trust him not to ruin his career plans?
Gunnar Evans was dishonorably discharged from the Army during Don’t Ask, Don’t Tell for his openly gay sexuality. He fought the system and lost, but continues to help the young officers sent to his door discover their hidden desires. When gorgeous hunk Lt. Oates arrives, he knows he must breach the lieutenant’s defenses in order to show him the pleasure he deserves. But once he gains access, he may never want to let him go.

“Oates… are you sure?”
He licked his lips. “Yeah. I mean, I want to know. Don’t you think I should know?” He swallowed. “It doesn’t make me gay or anything.”
“No,” Evans whispered as he scooted closer. Oates grabbed him by the ass and dragged him into position next to his chest. Letting out a soft cry, he gripped the roof straps and jutted his hips forward, sending his cock into Oates’ palm.
Oates’ hand traced down his length slowly, experimentally.
Evans’ thighs trembled at the curious, innocent touch. Oh God, he’s so fucking hot I’m going to come even before he gets his mouth on me. He groaned and squeezed his eyes shut, gripping the straps harder, praying for mercy and control.
Oates’ warm tongue licked his slit. Again. Then he ran this thumb over the head, swirling the pre-cum around it. “Fuck. Sir. You’re so fucking hard. I’ve never seen a cock this big.”
“God.” Evans gritted his teeth, muscles tense from straining to hold himself still and his orgasm at bay.
The moist heat of Oates’ mouth enveloped his head. He sucked, tentatively, then again, a little harder. In his eyes Evans saw curiosity, vulnerability, a willingness to please. The look tore holes in his heart. Damn, he’s a fast learner. Almost as quick as I was.
Evans’ hand flew to the back of Oates’ head, cupping it, using the connection to surrender to the man’s touch. At the same time, his hips pressed forward obeying his blind need to bury himself in any part of this man he could reach. “Oates. Oh God. Take me. Please.”
Oates tried different angles with his head until he found the right alignment. When he was there, he jabbed his head forward and gagged.
“Easy. A little bit at a time. It’s work to take a man in, Oates. Loosen your throat and go slow.” How he found the ability to talk, he’d never know. Oates’ mouth on his dick turned his brain cells to mush. Must have been the sergeant in him talking.
Oates nodded around his cock and this time took a nice slow dive down the length. He hesitated for a second just as Evans’ head hit the back of his throat, then grabbed Evans by the ass cheeks and slowly dragged his balls to his nose.

This is a *hot* read and part of my upcoming Bear series. Hope you like it!
Eva