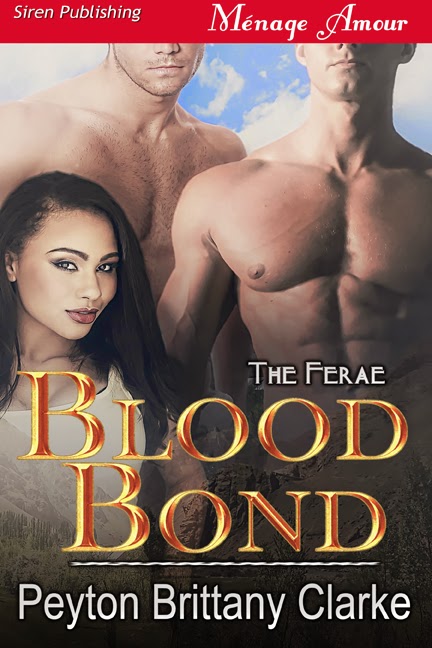 Time is running out for CIA Agent Colton McClain. Caught between two worlds, he must choose—his Ferae side or human; he can’t have both. Haunted by his own failures and his family's past, Colton refuses to follow their same path. His wife Lizzie and his husband Jarrod are caught in the middle. Threatened by the townspeople for having a marriage with two alpha males instead of the traditional alpha and beta, the clock is ticking on how long they can live together as a family. Add on the fact that one of them gets the Rut because of their unconventional relationship, all bets are off that they will maintain the happiness they so desire. But their love is strong; still, can it defeat Colton’s fears? He is the key. Now he must act.

He leaned forward and sniffed the crook of her neck, making her spine tingle. His hot breath beaded on her skin. His body oozed with the potency and virility of a powerful alpha male while his spicy scent made her head spin and her mound wet.
“You think you can keep up?” she asked, her breaths jagged.
“I was gonna ask you the same thing.”
Colton's piercing blue eyes constricted as he pulled her to him. His mouth claimed hers in a hot kiss, taking her breath away. Pulling away with a hiss, he nipped at the flesh on her neck and shoulder. Bathed in pleasure, her brain switched off as she pulled off his blazer and tossed it aside. He licked her lips and devoured her mouth as they stumbled over the furniture, peeling away layers of clothing.
Her back slammed against her bedroom door as he pressed his body against hers and traced her lips with his tongue. The more he toyed with her, the harder it was to control the primal desire inside her. If she let loose she knew she would hurt this citified ferae, so tamed by the normal humans in this world.
He grabbed her ass and lifted her, wrapping her legs around his hips, and thrust forward, grinding his hard crotch into her center. She grunted as he thrust again, pushing the breath out of her body.  She unwrapped her legs and pushed him away and then turned him around and climbed onto his back. She wrapped one arm around his neck and the other around his chest and squeezed, swearing in their ancient tongue. She squeezed and squeezed, crushing his solar plexus, releasing all of the hormones for his mating desire. He writhed under her grip, nearly gasping from the lover’s embrace. He fell to the floor, causing her to land on her back.
He paused, caught his breath and grinned. “I thought so.” Scooping her up with one arm, he slung her over his shoulder.
Lizzie giggled with a dreamy, awesome pleasure he hadn’t experienced in years.
He tossed her onto the bed and ripped off her panties then spread her legs. He buried her face in her mound and devoured her center. Her ecstasy grew as his tongue darted in and out of her opening. She closed her eyes, trying to hold back the crest that was building to a climax, moaning and writhing from his touch. He unzipped his fly, freeing his thick, meaty cock. His rigid pole stood straight, its tip dripping with pre-cum.
She gasped as he sank into her, filling her completely. She moaned from the pleasure and the pain as he pounded her, causing her to keen with delight. He paused and looked into her eyes, before withdrawing and turning her over. Putting her on all fours, he penetrated once again, grabbing her by the scruff of her hair with one hand and holding her hip with the other.
She grunted with each thrust as his powerful ministration shook her and the bed. It had been a long time since any man had worked this good. He craned her back further, wedging his cock into the surface of her cervix and grinding. She moaned gutturally.
He released her hair and held her still as he nailed her sweet spot over and over again. She wailed her climax, again and again and again. Her arms and legs became weak as he continued to take her from behind. He spread her legs further apart, grunted as he pushed into her again. She came once again, her juices pouring all over him. His seemingly boundless stamina began to drain her.  The muscles in her center grew sore from the pressure of his rock-hard dick.
She knew an alpha of his status could go all night. And she just wasn’t ready. She tightened her mound. He paused and whimpered. He attempted to thrust once again. He didn’t want to come but she was going to make him. It was the only way she could survive the encounter and still being able to walk in the morning.
She tightened her muscles once again and then drew on them, milking him. He panted and contorted his expression in pain. He grew rigid and shrieked. The Taking was working. No ferae male liked or wanted the Taking, but often it was a female’s only defense from such an onslaught.