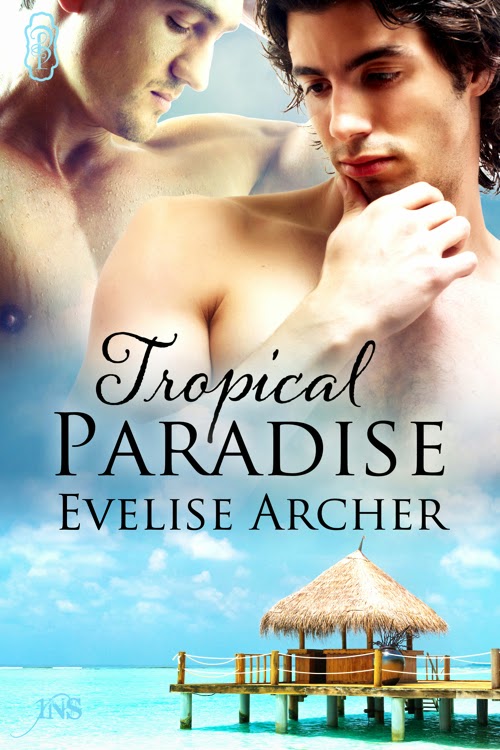 Can Madame Eve work her magic one more time? Leo Santos left the one man he loved behind to care for his ailing father. Sky Macy never forgot his one and only that got away. When they meet again on a blind date setup by 1Night Stand, will they go their separate ways or will the sparks reignite the love they never forgot?

On a secluded beach at the resort Las Casitas Villas in Fajardo, Leo and Sky come face to face after years apart. Passion ignites so hot it threatens to burn them from within. They both will need to open their hearts and learn to trust if they hope to find love during one night of passion in a tropical paradise.

Skyler smiled, remembering the first time he’d seen the olive-skinned young man. Leopoldo Maria Santos. The hotheaded Latin that blew into his life with the force of the hurricanes that hit Leo’s homeland. He had strutted into Sky’s dorm room three days before classes started, freshman year.

“Hi.” Skyler’d waved from his perch on the bed. He’d been dressed in shorts and a tank top, trying to stay cool in the muggy early September day in Philadelphia. “You a nursing student, too?”

“Yo? Hell no. Not that I have anything against nurses, but aren’t they usually women? Teacher. That’s what I want to do.” Hmmm, clearly not from around there, not with that accent.

“Nah, men are nurses, too. Maybe it’s not as common, but I’m hoping that’s in my favor. Where you from, cool accent?”

“Puerto Rico. Just arrived here last week. Stayed with my sister and her fiancé in New Jersey.” His new roomie, tanned and handsome, dumped his duffle on the empty bed. Sky moved over to sit on the bed. “So, I’m Sky. Skyler but not too many people call me that. And you?”

“Damn, man, Maria is your middle name? Sucks to be you.” Sky laughed so hard, tears streamed down his face and he held his side.

“So what, your mami couldn’t figure out what to call you, so she decided on Sky instead of bird? What the hell stupid name is that? At least, where I come from, having Maria as your middle name, boy or girl, is something important. I was named after the Virgin Mary.” Disdain filling his voice, he gave Skyler the hairy eyeball.

Intrigued by the boy with the girl’s middle name, Sky admired his passion. It didn’t hurt that Leo also had killer looks.

Skyler pulled himself from his reminiscing and squinted in the sunlight, trying to get a better look at the man on the dock. Could it be Leo? He wanted to shout from the balcony but feared disturbing the other guests. And what if the man only resembled Leo? Years passed and people changed. Still…. Telling himself he needed to get to the dock anyway, he grabbed his overnight kit and sunglasses and made his way to the lobby desk.

“Hi, Celia, can you tell me where I go catch the launch? I swear I saw someone I know down by the marina.”

“Well, you won’t have much time to spare, but that’s where you’re headed. Out the front door, follow the right-hand path down to the marina, about a five-minute walk. When you get there, look for a yellow launch and ask for Joe. He’ll take you across to Palomino. Everything is ready there for you.”

“Has my date arrived on Palomino yet?” His voice cracked, nerves getting the best of him. How did Madame Eve choose the perfect person for someone? Would they get along? Have the same likes or dislikes? And had he really spotted Leo?

“I’ve not seen him, but I have it on good authority,” she winked, “that the man of your dreams is already on the island, enjoying the sun and sand.”

“Celia, you’re a tease, but I can tell we’re going to get along.” He chuckled and even that slight bit of humor settled his nerves. “Wish me luck. The man of my dreams may be just a short boat ride away.”

“You have no idea,” Celia called after him.