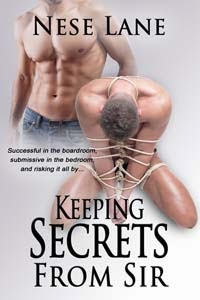 While "hatchet man" Drew Chandler is both feared and revered in the boardroom, he is completely ruled by his need for submission in the bedroom. Dominance and pain give him that edge vital to his corporate success, but Sir has been unavailable and Drew's hold is slipping…

Lost in his fantasy, it took a few seconds for Drew to register that he’d actually heard Sir’s voice. The vague notion he hadn’t noticed the alarm reset mingled with a fear-laced thrill that lanced through his system just as his lover’s warm palm smacked hard against his quivering ass.     Yes…finally. The burn registered a second before another landed on top of the first, and he cried out in agonizing bliss.