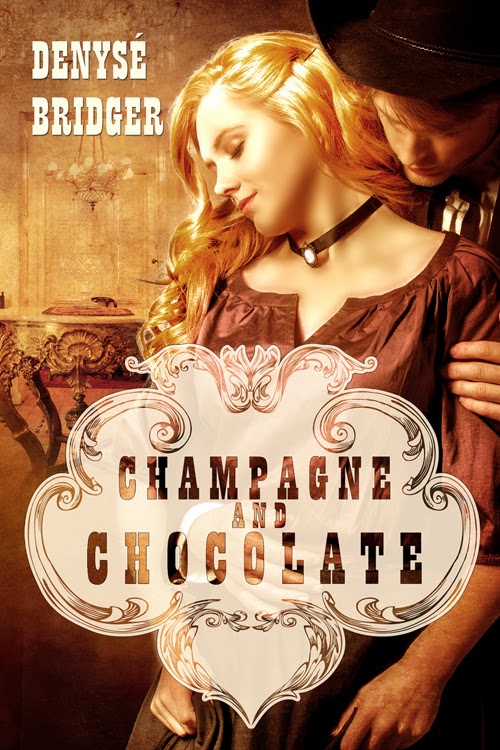 From different worlds, drawn by desire, passion is about to change their lives forever....

Austin Standish is a man of refined tastes. Intelligent and educated, Austin enjoys all of the best life has to offer. A gambler, a gunslinger, and a man who has plans to taste the sweetest prize at The Palace Casino and Saloon - the lovely owner, Chantille L'Amour, the most sought after jewel on the Barbary Coast.

Running a high-class brothel and casino isn't exactly the life she was born to but Chantille is determined to overcome the ruin her family was left in once the Civil War ended. But, she has chosen a difficult path... one that demands much and leaves her lonely. She's noticed the handsome man who comes into her world from time to time, and when she chooses to give in to desire, the passion evoked by Austin's touch may change her life forever....

As she led him to the private wing of the large building that housed her home and business, Chantille had time to question the wisdom of her actions—again. She'd been berating herself for most of the past thirty minutes. Austin Standish was a danger to her; she knew this on an instinctive level. Not that he would hurt her, of course. But, he was dangerous, just the same.

She was acutely aware of every panther-like, lissome step he took behind her. He was elegant in manner and dress, quietly contained but always alert. The sense of being in perilous company assailed her with new severity. She opened the twin doors to her living suite and went inside, hearing him close the doors behind him before joining him.

She continued into the room, uncomfortable as she chafed against the restraints of her heavy dress and the many layers beneath it. She'd permitted a few select men into this suite over the past five years, but none had ever made her so acutely aware of herself and the desire to shed her clothes and feel solid muscles and male hardness pressed to her warm curves. Her breasts felt heavy, and her nipples strained against the fabric of her chemise, rubbing against the soft material until the pebbled points ached. Between her thighs, a slow, steady throb began to increase in rhythm, finding a matching tempo in her heartbeat.

The soft illumination from the fireplace touched the wood that dominated the room's furnishings, warming the smooth, lustrous finish as shadows danced on the walls and glimmered in the reflections of the mirror that adorned one wall of the room. She saw nothing, only the darkness that had grown around her so steadily throughout the past half-hour, a darkness that touched her with fears she couldn't clearly define, much less explain.

Watching the play of light catch in the soft gold of his hair, Chantille was struck again by the intuitive knowledge that dominated the man's handsome features. Barely suppressed sensuality and anticipation were so strong in the shadowed intimacy of the suite that she felt she could reach out and touch the things that presently put them on opposite sides of a chasm she didn't know with certainty she wanted to close. The only thing she did know was that she wanted to be with him more than she had any man she'd ever met.

"Tell me what you're feeling right now, Chantille."

"No," she whispered, then shook her head to deny her dishonesty. "Yes."

For the first time, Chantille looked right at him, and Austin could read all the uncertainty he hadn't taken the time to notice before. He answered her honestly, unwilling to do anything less.

"Being vulnerable isn't always a bad thing, Chantille. Sometimes it makes you stronger."

"I don't believe that, and you certainly don't." The edge crept back into her tone. "I feel like I did when I was a child, needing to be wanted. When I came to San Francisco, I swore I'd never feel that way again."

Austin drew in a deep draught of air and ran a hand through his hair.

"You don't have to be afraid of anything, Chantille." He knew the words were weak, and he could have kicked himself for them once they were spoken.

She actually managed to smile at the statement, though there was no warmth in the expression.

"Weak women hold no appeal for men like you, Mr. Standish," she remarked.

"Is that what you want? To appeal to me?"

She laughed, a low murmur of sound that stirred the air between them.

"I want to share my bed with you, Austin," she conceded. "What I don't want is for it to cost me everything I've worked for."

"What are you afraid of losing?"

Chantille met his eyes as if she were trying to pierce the shadows that surrounded them, to see what lay hidden behind that confident stare. When nothing shone forth, she closed her eyes.

Austin let the silence engulf them again for a long minute, then he closed the distance, touched her chin, and made her face him. His thumb brushed at the tear welled in the corner of her eye.

"I do want you," she murmured, voice raw with the force of her feelings.

The loneliness and the need for reassurance was almost a physical presence in the room with them, and Austin was forced to wonder just how long it had been since Chantille L'Amour had uttered those words to any man. If she ever had.

Austin's whispered words were like a soft breath of air touching her face as he leaned forward to cover her lips with a tender kiss. She moved into the caress with a soft gasp, and her knees seemed to buckle as Austin's tongue slipped into her mouth with possessive hunger.

Chantille broke the intense kiss, and her head fell back as a sigh of relief and pleasure slipped out of her. She wrapped her arms around Austin's neck, then buried her face against his broad shoulder as she shivered into the sensations they were igniting in each other. She smiled at the slight catch already detectable in Austin's breathing, then shuddered when his hands began to work the buttons of her gown.

Suddenly, she eased free of his embrace and took a step back. He watched, eyes narrowed for a moment as he waited to see why she'd withdrawn. The wariness left his gaze a few seconds later when she lit another lamp and stood next to it.

The soft golden glow of the flickering lamplight illuminated the deft movements of her hands as she undid the buttons and hooks that held her gown together. Austin smiled and went to sit in a chair near the fireplace, his eyes never leaving her. The beautiful amethyst silk crumpled into a heap at her feet, and she gracefully stepped free of the shimmering mass. Next, the petticoats and crinolines fell into a crisp white pile, and she smiled, her expression faintly wicked with delight. He forced himself to remain still while she undid the hooks of her corset, her actions slow and deliberate. Her eyes never lost their hold on his, and she walked toward him, hips swaying seductively.

When she was standing directly in front of him, Austin smiled up at her. His look dropped, and his eyes locked on the thrusting peaks of her breasts, mere inches from his lips, nipples a soft shadow against the white of her chemise. She bent slightly and cupped his face in her hands as she leaned into a slow, exploring kiss. Austin's arms went around her, and he lifted her off her feet and sat her astride his thighs as he settled deeper into the armchair. The kiss went on forever and grew more intense with each tiny stroke of tongue they exchanged. When he thought he'd die for want of air, she drew away again and met his gaze.

Austin's smile became a grin when Chantille slipped the straps of her chemise off her shoulders, then tugged on the front of the thin garment. She peeled the material away from her skin, offering lush ivory breasts to him. He was only vaguely surprised when she took his hands, and kissed each palm before placing his eager fingers over the smooth swells of her flesh. She placed her own hands on his shoulders and slid closer to him, her thighs gliding against his.

He leaned back in the chair and released her, curiosity holding his lust at bay for the moment.

She slid back, laughed shakily when her knees wobbled, then she walked a few steps from him. The light trailed her, seemed to be drawn to her within the room, and he watched with renewed fascination as she finished opening the chemise and tossed it aside.

She locked her gaze with his again for an instant, then smiled when his eyes followed the motion of her hands...