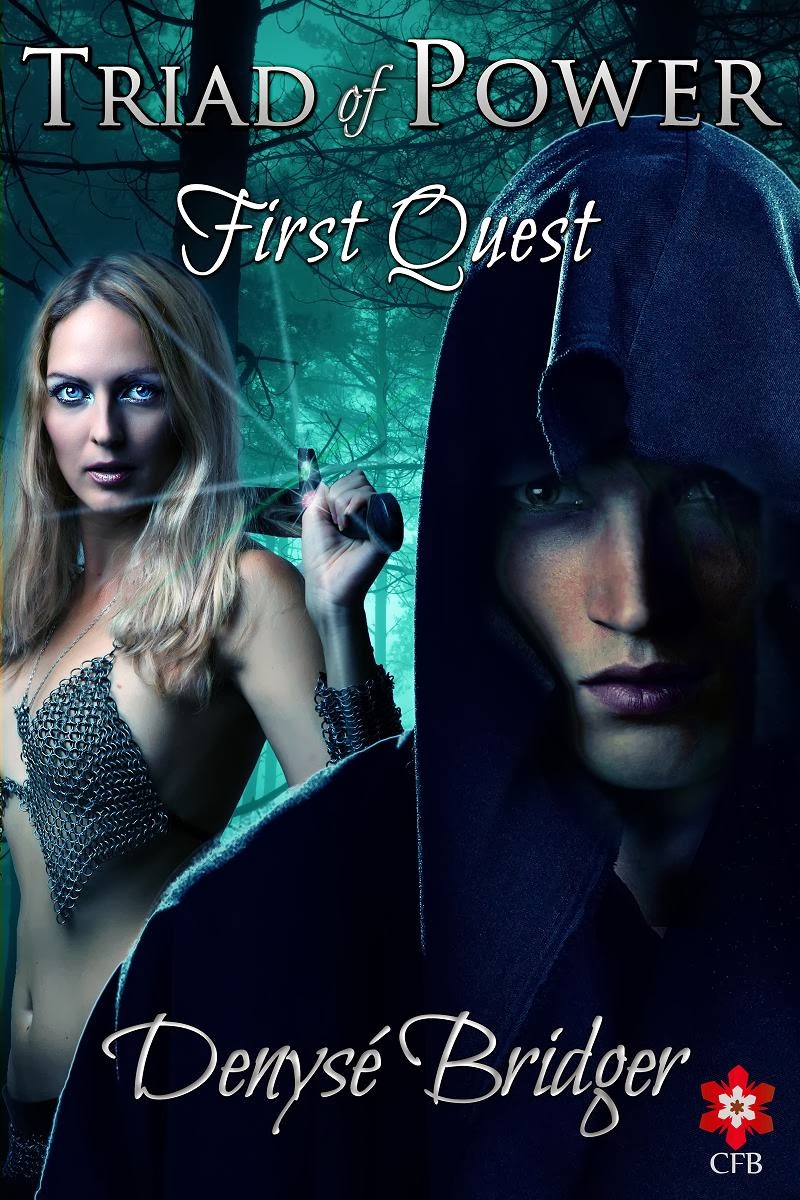 Blurb: Book One of Three: During the time before the Great Forbidding was created, it was believed the defiance of the Renegades could be contained. To that end, the Council of Power called upon their Ancient Gods for assistance. In response, the Gods ordered creation of the Triad of Power–three swords, each one imbued with the essence of a gift unique to those who would wield the weapons as the Guardians of Foress. Like all magic, each crafted blade contained the driving sorcery of its creator–not all wizards are immune to the weaknesses of men, and within the Triad, conflict itself was bred without conscious intent or knowledge. So begins the legend, and the epic fantasy of the TRIAD OF POWER.

As contented peace steeped the air around them, and they were able to breathe in near silence again, Sherindal contemplated her surroundings. On her knees, with the Prince of Ember still sheathed within her, she had never known a moment of more perfect serenity and completion. Her senses hummed with awareness of everything: the texture of the bed linen, cool silk, caressing her heated skin, the subtle patterns swirling amid the tapestries that hung on the stone walls of the bedchamber, even the heavy scent of candle wax added another layer of appreciation to her happiness.

“You really are magnificent, Sher,” Rienn whispered, his arms wrapped around her, drawing her close.

She leaned to one side, looped her arm around his neck and drew his mouth to hers in a kiss that was filled with gentle passion.

Rienn nodded. His hands on her waist moved her. She shivered as he slipped free of her. “I’ll order a bath and some food,” he told her.

She grabbed his wrist and shook her head. “Later. I want you to hold me.”

Rienn stretched out and pulled her down to him, spooning her body to his when he pressed her back to his chest.

They’d only slept for minutes when the huge doors of the Prince’s chambers were flung open and the spacious room was invaded by numerous men, all bearing swords.

The word was a warning, and Sherindal slithered from the bed when he released her. She scooped up her weapon as she rolled, oblivious to her nakedness. She whirled to face the first rush of the attack. Somewhere through the early morning hours since they’d made love, Rienn had thought to retrieve his breeches, she noted from the corner of her eye. He had managed to gain his weapon, and they fought, back to back.

Sherindal hissed in fury and pain when the second of the men who engaged her slipped past her defense and inflicted a wound near her waist. It was a surface injury and she quickly rewarded him by slicing off his sword hand. Howling in agony, he toppled back, then fled as he recovered his footing several feet away from her.

Rienn had killed two men and was about to run through the third when Sherindal’s voice filled the room, and the blade she wielded, Huntor, rose with her song. The attackers froze momentarily, those two who remained, and she smiled when the weapon cut them down, then drifted back to her outstretched hand, coming to rest in her grasp with near peaceful ease.

“Your blood-thirsty weapon has been sated nicely this morning,” Rienn observed with a tense glance at the gleaming blade.

“Who are they?” she asked, her tone cold as she met his gaze.

“Why would you assume I know?” he retorted instantly. “This is hardly what I would consider an invigorating start to the day!”

“Really?” One eyebrow rose in emphasis of her sardonic tone. “It is one of the more interesting diversions you might have provided, Rienn.” Her laughter was faintly mocking, and not a little bit ironic.

Rienn’s handsome features suffused with rage and he reached for her, gripped her bare arm with fingers that dug into her flesh like steel bands.

“You can be an evil bitch,” he whispered darkly.

Sherindal smiled, and this time it was genuine. She nodded, kissed his chin, the closest she could get to his mouth from her disadvantaged height, then she gasped as a fiery lance reminded her of the slash near her left hip.

He released her, scooped her into his arms, and placed her in the center of the feathered mattress of his bed. He looked closely at the injury, yanked the bell pull, and then went to the heavy wardrobe at the far end of the chamber.

His guards were rushing along the corridor when he returned to the bed and helped Sherindal into one of his linen shirts. She bit her bottom lip against another stab of pain and laughed in macabre amusement when she spotted the duo who entered the room.

“They look rested enough, my love,” she muttered.