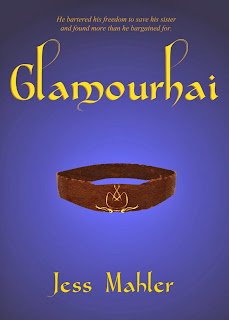 Glamourhai
By Jess Mahler
Blurb:
When the fae lord, Oeloeff, takes his sister, Mattin seeks out Countess Jahlene n'Erida, a fae noble who is Oeloff's enemy, and begs her to help free his sister. In return for her help, he offers the only thing he has--himself. Lady Jahlene accepts Mattin's offer, and he finds himself an initiate of a strange world where pain is pleasure, cruelty is love, and nothing is as it seems.
Mattin hates being a slave, almost as much as he hates and fears the fae. But as he learns more about Jahlene, he finds himself drawn to her, and her sadistic pleasures. As they race to prepare their trap for Oeloff, Mattin fights to reconcile his desires with his fears. Until he makes a mistake that costs him everything...
Excerpt:
“Mattin, is everything alright?”
“You mean aside from the chafing, lady? Bouncing around on top of the carriage is not nearly as bad as bouncing around on top of this horse!”
She laughed. “What did you think of Goodman Wrotty?”
Mattin called up his recollections of the mine manager, “He’s a hard man, lady. He’ll drive his people, but I think he’ll push himself just as hard.”
“And the miners?”
He answered as best he could, and she asked several more questions, until he felt like she had wrung from him every observation about the day. Finally she nodded, “Please write down your thoughts when we get back. I’d like to have them to refer to in the future.”
Startled, he mistimed the horse’s movements and almost fell from the saddle. “Yes, lady,” he said, as he regained his balance, “I’m glad you find my thoughts helpful.”
She flashed a grin at him, “You are, aren’t you? Good. But you aren’t telling me something.”
“Lady?”
“I try not to push Mattin, and to leave you some privacy, but something upset you. I need to know what.”
“Ah.” He grimaced, “Is that a command, lady?” Damn it, couldn’t she at least leave him his thoughts? Must he give her everything? And this… already his resentment and fear hurt her. He didn’t want to hurt her more. Why couldn’t she leave well enough alone?
“I was going for subtle request, but if I have to make it a command, I will.”
“I didn’t want to… disturb you, lady.”
“It’s hardly disturbing me when I’m asking.”
The phrasing tickled his humor. “But you haven’t asked,” he said with a grin.
She raised a fist in mock threat. Then her eyes narrowed. “Mattin, as much as I enjoy your teasing, you’re stalling. Tell me, now.”
He looked down, rubbing at his collar. She rarely commanded outright, that she did now meant he had pushed her far as he could. So, thinking about the words as little as possible, he told her. “Some of the miners… seemed as if they pitied me.”
“I see,” the humor was gone from her voice. When Mattin glanced over at her, she sat stiffly, her face a mask.
“Lady, I—”
“Spare me.”
Mattin bit his tongue and they rode in silence again, but words pressed against his teeth. Finally he burst out, “No. You wanted to know what was bothering me, you wanted to I know my feelings, and by the Mare I’ll tell you.”
She pulled up her horse and opened her mouth. Mattin rushed to speak, rolling right over her.
“I’m angry, lady. I’m angry at them. Why, by the Mare, should they pity me? This may not be the life I want, but it’s a good life, with good people. And it’s the life I chose. They had no right to look at me that way, and… and I wouldn’t trade places with them if someone paid me to! And Mare’s Bridle, lady, I care about you. I didn’t want to, but I do. Will you please stop thinking that every time I’m upset it’s about you!” He stopped and took a deep, shuddering breath. She stared at him, the mask fading from her features. “I don’t think I can ever be what you want, lady. But I’m starting to wish I could. And I hate knowing that I’m hurting you.” He hadn’t realized, hadn’t even admitted to himself, how strongly he felt. But it fit. It was right. And by the Mare’s Blood it was good to say it.
The lady edged her horse next to his, then reached out and rested a hand on his cheek. She was so solemn, he didn’t know what to think. But it was the first time she had touched him… just… touched him. As nervous as if he approached a scared and cornered animal, he reached up and put his hand against hers.
“Maybe you are right, Mattin. But you’ve still given me more than I expected.”
Neither of them said anything for a long moment. Before Mattin could feel uncomfortable or awkward, she pulled her hand away with a laugh and kicked her horse into a run. Over her shoulder she called, “Race you to the next hill.”
Cursing, he grabbed on tight as his horse ran after her. The forgotten guards clattered along behind.
Author website: http://www.fantasyromanceserial.com
Purchase link: www.amazon.com/Glamourhai
Posted by Blak Rayne Books Blog at 10:00 PM