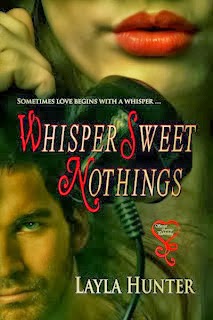 Whisper Sweet Nothings
Blurb:
Sarah Cole never expected to find herself divorced and nearly broke at the age of thirty-four, no less working part-time as a phone sex operator for Whisper Sweet Nothings.
Solely responsible for the care of her grandmother, she's willing to do whatever she needs to care for the woman who raised her, even if it means foregoing her dream to sing.
News of his impending deployment turns Lt. Samuel Meade's world upside down, and he finds himself alone to face the unknown when unexpectedly abandoned by his girlfriend.
Eager to help him shake the blues, friends set him up with Whisper Sweet Nothings for a little fun before deployment. Not wanting to seem ungrateful or endure the merciless ribbing of his buddies, he goes ahead with the call, expecting the worst.
Instead, he finds Sherry (aka Sarah Cole), a kindred soul as seemingly lost as he is.
Neither could have imagined the instant bond forged that night, the foundation for a friendship that would span nearly a year. Sharing heartfelt letters with a woman he's never met, Sam finds himself falling for her.
Scarred in more ways than one during his deployment, Sam returns stateside suffering from PTSD and a painful leg injury. Convincing himself that he is as broken as his dream of pursuing her, he gives himself over to despair.
Unbeknownst to them, with the help of a friend, they find themselves face to face, embarking on a journey of self-discovery, acceptance and a once in a lifetime love.
Excerpt:
Sarah jumped when the phone finally rang, staring at the console like a deer caught in headlights, unable to move. What the hell was she doing?  This was insane, an introverted, thirty-something, afraid-of-her-own-shadow architect-wannabe trying to pass herself off as a phone sex operator? She'd lost her mind.
"Are you going to get that or what?" Rachel chided. Sarah looked helplessly to her designated trainer.
"You can do this. Remember why you are doing this, sweetie. It makes it easier. I'll be nearby," the woman reassured her.
Sarah nodded, adjusting her headset and reaching over to press the flashing button—the button that would lead her down a path she'd never pictured herself traversing, especially not at this point in her life.
When she began training, she'd been asked to pick a name for herself and had chosen Sherry. It had a sweet, girl-next-door quality to it unlike her actual name. Her eccentric, literary-minded mother had thought it a wonderful idea to name her only daughter Scheherazade, although most of her friends called her Sarah. Tonight, though, she was Sherry, a sexy voiced seductress on the other end of a telephone entertaining horny men and perverts and…
Stop! You can do this Sarah. If you could live through one of the most brutal divorces in recorded history, you can do this.
"Hello, this is Sherry. Welcome to Whisper Sweet Nothings…have you called us before?" she asked sweetly even though her hands shook and her heart pounded painfully within her chest. Quickly, she glanced at the computer screen to scan a few details about her caller.
"Uh, no…this is…well, this is my first time calling."
Given she was new she'd been told she would get the undecided first-timers or the clients who wanted a more vanilla experience. Most of the women here had a specialty…BDSM, fetish, gay/lesbian, etc. As she trained, she could add to her repertoire if she chose which would increase her moneymaking potential.
"Not to worry. That's why they put you in my very capable hands. I will take care of you. What's your name?" she asked, pulling out the scripts she had studied ad nauseum.
"Sam. My name is Sam. Know what…this was a mistake. I…I should go. I'm sorry, ma'am…I didn't mean to waste your time and…"
She could hear his voice trembling and her heart went out to him. He was as nervous as she was. "Sam…listen to me. I probably shouldn't tell you this, but would it make you feel better to know that this is my first time too?"
She caught the look of disdain from Rachel who shook her head from side to side, obviously a mistake and likely not to be her first. Sorry, she mouthed, turning her attention back to Sam.
"I think you are just saying that to keep me on the line."
She smiled. "No, this really is my first time. I'll make you a deal. We take this one-step at a time…together. How does that sound?"
There was a moment of silence and she thought she'd lost him. Her heart sank.
"That sounds fine."
"So tell me…what is it you were looking for when you called me tonight?"
Purchase Link: http://store.secretcravingspublishing.com/
Publisher Link: http://store.secretcravingspublishing.com/
Posted by Blak Rayne Books Blog at 10:11 AM