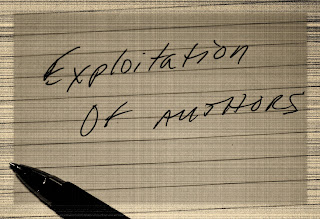 According to many journalists and other professionals involved in the publishing industry, when writing an article the topic is irrelevant as just about any subject matter is acceptable these days and, as a rule of thumb, personal opinion shouldn't be a part of the debate. We, as authors, bloggers and social media junkies, should pass on information only. But, such a rule can prove difficult to implement when you wish to share a personal experience you believe will benefit others. Anyway, today, I'm breaking the rule.

To give a little history, my publishing career began in 2008 when I signed my first contract with a local small house. Since then I've gone into self-publishing. The road was a rocky one in the beginning, people in the industry wouldn't share information—absolutely nothing—as if there was some top secret formula for success that only they were privileged to understand and execute. I struggled daily, weeding through the bullshit in search of the truth. Yes, that was a touch melodramatic, but an honest statement. No one and I emphasize, no one wanted to share his or her wisdom. Not one author would divulge their marketing strategies, promotional venues, social media sites, his or her experience with rejection, or the ugly truth about the abuse within the industry. The problems were kept hush-hush. And God forbid you said anything because everybody knew everybody in the business. Most authors were either too confused or too scared to make the exploitation public and, in turn, they were bullied. But, thankfully, the last five years have brought about significant change—change seemingly for the better.

The Internet has made self-publishing a reality for anyone who owns a computer. Marketing companies, publicists, literary agents, editors, cover designers, and small publishers are only a click away. The sky is literally the limit! In the past, rejection was commonplace now it's passé. Who cares if an agent denies your query letter because there are a hundred more lined up directly behind him or her. And if they don't respond you can just self-publish. Right? True...but now the vultures are circling. Another warning is posted every day, as new injustices are committed against the author. For instance: how the government takes advantage via the large eBook distributors and vice versa. Liars have tainted the literary world along with the thieves and bureaucracy, so authors beware.

I opened an author account with Amazon a little less than a year ago with the intention of listing my self-published novels. No sooner did my first novel go public and Amazon changed the rules. In order to list a novel for sale and receive the full 70% royalties the novel had to meet specific criteria; i.e. price. Then, the rules changed again. When I tried to publish my next novel, I had to enroll it in the Kindle Book Lending program for 90 days in order to receive full royalties, and I couldn't list it for sale with any other distributor until the 90 days were up. Basically, I was forced to comply unless I wished to receive poor royalties at 35 to 40% depending on the country where the sale(s) originated.

Now I'll explain my latest complaint, and this is serious, so please, those of you who don't live in the United States pay close attention. If you are NOT a US citizen and you live in a country that has a 'tax treaty' agreement with the US, you will be forced to fill out tax information, including a W-8BEN Form in order to receive royalty payments from Amazon. Once you fill out that form the IRS will issue you a TIN number. Which means that as a non-US citizen, depending on your country with the tax treaty, you might have to submit two income tax forms a year in order to get back the 30% in royalties that Amazon took on behalf of the US Government. I know it sounds simple enough, but the consequences are far from straightforward. I live in Canada, and before I filled out anything with Amazon I contacted a certified accountant that deals with the IRS and is familiar with US tax laws and treaty. Be advised, for your own peace of mind, you should do the same.

The accountant stated it wasn't in my best interest to apply for a TIN. If I made millions of dollars in sales it would be warranted, but until then, it isn't worth the hassle or an invasion of my financial privacy. To put things in plain English: if you apply for and receive a TIN number you will be obligated by law to fill out an income tax form every year, for each country, and the IRS as the Canadian Government will be able to see your earnings. If you own another business or make too much money at your current job either country can impose higher tax deductions that may incur further snooping. Once the floodgates are opened they are nearly impossible to close. It's bad enough that the government here takes their pint of blood I don't need the IRS doing the same.

Amazon notified me that if I don't fill out the necessary income tax information they will remove my novels from KDP. So, in light of the situation, I have removed them myself instead, deciding on an alternate route to distribute. Along with the government, Amazon modifies their terms and conditions almost on a daily basis and believe me if you read the fine print those adjustments never benefit the author. Have a great weekend!
Happy Yaoi Hunting!
Blak Rayne
Posted by Blak Rayne Books Blog at 7:40 PM