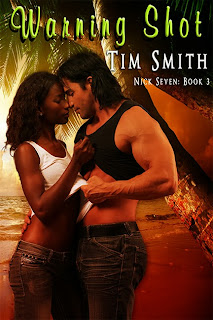 What genre do your currently write? And, is there a genre you'd like to write, but haven't tried yet?
I switch between romantic mystery/thrillers and contemporary romantic comedies. The mystery/thrillers are where my true interests lie, but I like writing the others as a break and to prove to myself that I can do something different. Those are the ones I write when I want to express something from the heart, since many of them are based upon personal experiences.
One genre I’ve never attempted but would like to one day is a true crime story.
Many authors use a nom de plume, and they may use one opposite to their own sex. Do you think an author's sex or sexual orientation should dictate what genre they write?
I’m glad you asked because I’m a man who writes straight contemporary romance and I chose to do so under my own name. In retrospect I might have had more success if I had used a pseudonym, since many readers seem put off by the mere idea of a man attempting to tell a romantic story. Newsflash, ladies – guys have feelings and emotions, too!
You should write what you’re comfortable with but I don’t think that an author’s sex or orientation should dictate the genre. One of my stories included a m/f/f ménage where the women were bi-sexual, and the comments I received indicated that it was presented realistically. A good friend of mine is a male author of erotic stories who tells all of them from the woman’s point of view and he has a pretty good following. Of course, he uses a nom de porn so no one knows that a man wrote it.
Some authors have issues with character development, writer's block, plot summary etc. What is the biggest challenge you face when writing? How do you overcome the problem?
There are times, especially with the thrillers, where I’ll write myself into a corner. Late in the story I may come up with a terrific idea, fully develop it to the end then realize I didn’t set it up in advance. There are other occasions when I’ll stare at the screen and ask myself “What are these people supposed to do next?” When that happens and it appears that my brain is hopelessly deadlocked, I’ll put it away and work on something else for a few days.
What has been the single most successful marketing tool you've used to date?
Being a guest blogger on sites like yours. The exposure has been tremendous.
What are you currently reading?
I’m catching up on some books by my favorite authors like James W. Hall and Nelson DeMille. When Elmore Leonard passed away recently I re-read a couple of his books, and I just finished one by Budd Schulberg called What Makes Sammy Run?
How do you measure success?
The best yardstick for me is when I hear from someone who read one of my books and they tell me they can’t wait to read the next one. It doesn’t get much better than that!
Just for fun–
What is your favourite drink?
Grouse scotch whiskey on the rocks.
Are you a cat or dog person?
I’m an animal lover but deep down I’m a dog person.
Love or lust?
There’s a difference? Seriously, if you have love, lust isn’t far behind!
If you could spend the day with any famous author, who would it be? And, why?
Tim Dorsey, because I’ve always liked his work and I’d love to talk shop with him over a few beers.
If you could indulge free of any consequences, what would be your ultimate sexual fantasy?
Without getting specific, it involves being stranded on a tropical island with Khandi Alexander and Vanessa Ferlito. You can fill in the blanks.

Website Link: www.timsmithauthor.com
“Warning Shot” – Nick Seven, Book 3
Blurb:
Nick Seven and Felicia Hagens left the CIA for the laidback ease of the Florida Keys, leaving behind a life of intrigue. When Nick’s former mentor becomes part of a conspiracy with international repercussions, Nick breaks his self-imposed exile to stop him. The case throws Nick and Felicia into a juggernaut of espionage, government cover-ups and political assassinations. Will they succeed in stopping the plan in time? Can their relationship survive another unwanted intrusion?
Excerpt:
Nick brought Felicia’s hand to his mouth then kissed it. “This is one of the reasons I’m glad I have you around. You always keep me focused.”
“Is that the only reason you’re glad I’m around?”
“No, but it’s a long list.”
She moved to Nick’s lap then kissed him while running her fingers through his hair. “I’ve got nothin’ but time, Tough Guy.”
He caressed her cheek. “You’re resourceful, self-confident and independent.”
“You just described a Boy Scout. Can’t you do better than that?”
“You’re incredibly hot, passionate about everything and waking up next to you makes all my teenaged dreams come true.” He paused. “Plus you make a mean stir-fried shrimp.”
Felicia laughed. “Is that the best you’ve got? You were always better at foreplay.”
Nick kissed her. “You make me feel alive and I can’t wait to start every day all over again with you.”
She cupped his cheek and peered into his eyes. “That’s what I was gonna say. It’s kinda hard to explain but when I first saw you, all that time ago in London, it was like a jolt of electricity went through me. Then when you quit the Agency and I went back to Barbados, I felt this big empty inside, like somethin’ vital had been taken away.”
He traced her jaw with his fingers. “Same thing I felt. I’m glad we finally got together.”
She rested her lips against his and they kissed deeply. Nick inhaled her scent, a libido-boosting blend of Giorgio Red and her natural body chemistry. He massaged the back of her neck while Felicia cupped his cheek.
She pulled back slightly and smiled. “What’s that I feel pokin’ me from underneath?”
“Three guesses and the first two don’t count.”
She chuckled “What is it about this climate that always has you horny?”
“It isn’t the climate, it’s you.” He rubbed her cheek. “It’s always been you.”
Purchase (Kindle):
http://www.amazon.com/Warning-Shot-Nick-Seven-ebook/dp/B00FDJPKS0

Publisher (eXtasy Books): http://www.extasybooks.com/warning-shot/
Thanks for stopping by, Tim! It's always wonderful to have you here. All the best. :D
Posted by Blak Rayne Books Blog at 11:32 PM