Welcome to all my lil smut lovers! I’ve set candy dishes all around filled with your favorite sticky treats! For those who like it messy, there are bottles of chocolate and caramel syrup to dribble over your own sexy gobblins! Mmmm! 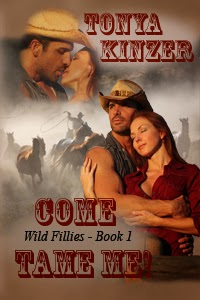 Speaking of liking it sticky and finger-lickin’ good, I hope you enjoy reading the hot excerpt I brought with me. Cassi’s best female friend, Dani, decides she needs to prove to Cassi how much she still needs Gabe whether Cassi wants to admit it or not! Dani isn’t shy when it comes to proving a point and decides to get Cassi hot enough to beg for Gabe. I hope you enjoy this scene:

At their room door, they looked at each other and burst into a giggle as Dani opened it.  Inside the dimly lit room, Cassi knew she’d had way too much to drink but with all the news she’d received today, she needed to tie one on! She kicked off her heels at the end of the dresser, set the bottle of champagne down near their glasses Dani had brought back and couldn’t wait to get out of her clothes.

Unbuttoning her skirt presented more of a problem when one drank too much and Cassie cursed. Slipping out of her skirt and jacket, Cassi laid them on the bed, then took off her nylons, sliding her fingers down her legs and pulling them off.

Dani peeled out of her clothes just as fast. With only a small lamp lighting the room, Cassi couldn’t help but admire the soft curves of Dani’s waist and ass. The satiny string of her thong disappeared between well rounded cheeks. When Dani turned toward her, breasts swelled above her deep plunging bra.

Cassi took in a deep breath as she looked away, hoping Dani hadn’t noticed her staring. Now she knew she’d had too much to drink and thinking of Gabe tonight had left her wanting him more than she’d realized. She stepped over to hang up her skirt and jacket on a hanger and placed it in the closet.

Warm hands moved around her waist; kisses along her shoulder teased her senses. Slowly one hand moved up to cup her breast and tweak a nipple, while the other slipped inside the front of her thong. Long nails played in the hair there before slipping down to cup her mons with a gentle squeeze.

As she tipped her head back, a moan of pleasure slipped from Cassi’s throat before she could stop it.
Suddenly she was turned toward the bed and landed on her side in the center with Dani behind her. The effects of the champagne left her mind reeling and visions of Gabe teased her. When her bra came unhooked, the straps slid down her arms and she rolled onto her back.

“Put your arms over your head and leave them there. Close your eyes...now think of Gabe making love to you.”

Cassi closed her eyes as a drunken fog surrounded her but the pleasure was undeniable. She stretched her hands above her head as searing heat covered a taut nipple and suckled her while fingers tweaked her other nipple. A warm body settle between her thighs, pressing against her hips and Cassi pressed upward, wanting more.

Her breasts were massaged and kissed, nibbled on and then bitten a little harder. As she pressed her head into the pillows, hands moved down her waist, fingers slipped into the band of her thong and tugged it down her thighs to slip it off her feet. When her thighs were spread, she resisted.

“Stop it. Enjoy the pleasure this brings and think of him.”

Visions of the way Gabe used to make love to her drifted through her mind as her knees were spread wide and raised. Fingers separated her lips to tease her clit and it swelled, begging for more. A mouth covered her clit, a tongue slid over it, back and forth.

Full suction on her clit made her clutch the pillows as stars burst around her. Two fingers slipped inside and swirled over her g-spot; she couldn’t stop the flood of juices that seeped down her ass as moans of pleasure echoed in the distance. Slow strokes continued and she moved with them as the suckling of her clit took her higher.

She couldn’t breathe fast enough as the strokes went deeper until she collapsed, breathless with pleasure that swirled through her body. Gabe’s vision formed above her and then he kissed her, tasting her own honey on his tongue as hands grasped her wrists and held them higher. Hips pressed against her own and she wrapped her legs around him, wanting more.

His kiss ended and he lay beside her, caressing her breasts, tweaking her nipples. She loved him and needed him back in her life.

Cassi rolled her head from side to side, trying to make sense of what just happened. Having so much to drink left her in a dream state and pleasure came to easily. “Gabe...”

“I’ll grab us one last glass of champagne and then we need sleep.”

…was that HOT enough for you? I rather enjoyed writing that scene so keep an eye on my site for new stories of female friends keeping each other’s frustrations at bay! I wrote a short story for flash fiction that I think will lead to a longer short story! Check out my Flash Fiction Short!

NEWS:  I’m working on book five of The Boss’s Pet Series and hope to have it ready by the end of December. If you’ve not read the series yet, please click over to my website and take a look. Book one, The Contract, is FREE to get you started! Thanks for stopping in! May you all find sticky treats and lots of tricks! Muah! 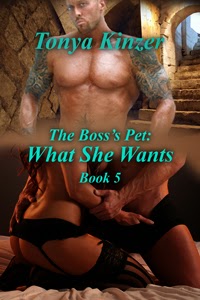 Her series, The Boss's Pet, will take you on a journey alongside Nick and Sondra as they venture into a lifestyle that pulls them deeper into a world of sensuality and submission. You'll not want to miss any of the books in this series so stay locked on her website to know when the next books get released.
When she isn’t writing, she’s the pet for her own Boss, where she works a few days a week. Her day job is seasonal so this allows her to write during the off season as well as design covers, websites, and promo items. She also enjoys helping other authors where she can with their editing and being a critique partner when time allows as well as offering guest interview spots on her Blog.

Buy Links
All Romance
Amazon US
B & N
iBooks