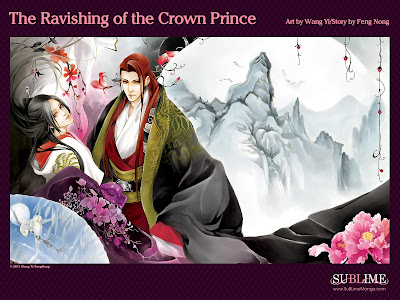 College student Feng Ming saves a little boy from getting hit by a car and in return loses his own life. The child's father utilizes magic, from what I gathered it's some type of space-time continuum, to grant Feng a new and different life, that of a prince from an ancient kingdom. Once Feng awakens to his strange surroundings, he's forced to deal with a lecherous regent governance by the name of Lord Ren Ting, who at first believes he may be a spy, and a whole host of odd servants, absentee parents, and system of government that is foreign to his way of thinking.
The Ravishing of the Crown Prince, story and art by Wang Yi and Feng Nong, is a quirky and at times downright laughable yaoi. No offense to the creators, but I found the dialogue weak, sex mildly explicit, and the art, though quite eye-catching, there were areas to improve upon. And, another disappointing factor, the story seemed to end abruptly, almost without rhyme or reason. But, regardless of all its shortcomings, The Ravishing of the Crown Prince demonstrates that Wang and Feng have great potential and, if anything, their talent has definitely laid the foundation for the publication of some superb yaoi in the future. Which makes TROTCP an enjoyable read overall. As for a rating, well, I give it 3 stars!
https://www.sublimemanga.com/reader/615
Happy Yaoi Hunting@!
Blak Rayne
Posted by Blak Rayne Books Blog at 1:43 PM