Okay, you’re a man who finds the opposite sex attractive. And, maybe, you’re favourite hunting ground is oh…let’s say a nightclub. The music, lighting, and general mood has this excitement about it–the basic atmosphere, energizing. You knock back a couple of White Russians for courage, while keeping an eye on all those young bodies gyrating to the music. From the moment you set foot on that dance floor you’re on the prowl. What do you seek? What catches your eye first? There’s a woman across from you. Her hips are swaying to the rhythm and hands clapping. She’s wearing this slinky little number and it happens to be red. You like red, so you move in. Then, you notice the outline of her ass through the sheer material. Hot damn, she isn’t wearing any panties. Bingo! Your heart’s racing, you’re already saluting the flag, and you haven’t even seen her face yet. But you know she’s just got to be hot with a sweet booty like that! 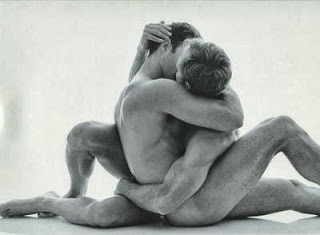 Now, same scenario, but you’re a man looking for a man. What turns you on? Do you look for a nice set of eyes or are your eyes focused on a part of his anatomy that’s a tad lower? Oh come on we’ve all done it! We see someone who sparks our curiosity then we’re checking out the tight ass and wedding tackle. And, if you tell me you haven’t, you’re a liar. I was single once. I’ve had my fair share of men. LMAO
It’s human nature to check out the package. When it comes to dating and mating rituals, people work by instinct and the lure of what we find at primordial level to be attractive. There’s also a formula involved, not consciously recognized, but it’s there nonetheless. It’s something Mother Nature gave us. The use of pheromones is one, a healthy appearance is another, body language and, of course, our physical being. It works the same for the animal kingdom. When animals are in need of mate they seek out the strongest and healthiest partner possible. This is done purposely to ensure that future generations will have the best genetics, which translates to survival of the species. We, as in humans, do the same. Scientists have proven it. When we’re young and the maternal/paternal time clock starts to tick, we go on the prowl. The whole idea of dating is great, but there is a significant almost animalistic meaning behind it. We need to procreate just as the rest of the creatures on this planet. In order to do this our partner needs to meet certain criteria: size, intelligence, physical as well as psychological health and, of course, we want a partner with sexual prowess. The initial attraction of ‘looks’ and an emotional bonding, which comes later, are a way to separate what we really desire and what’s a fundamental need. If you’ve noticed most beautiful women have these partners that I’d classify as geeks. And you’re left wondering…. What in the hell did she ever see in him? I can guarantee he’s got the brains, the financial security, there’s an emotional bond and he’s hung! LOL
Here’s a list of the most popular body parts, ten down to number one, that we’re always tempted to ogle and even try touching when on the hunt.
His Body Parts:
10 – Shoulders
9 – Chest
8 – Biceps
7 – Lips
6 – Tongue
5 – Hands
4 – Hips
3 – Abs
2 – Penis
1 – Booty!!!
According to experts and, all those lovely polls on the Internet, the ass has it! Can you believe it? LMAO I must admit, a nice tight set of buns does make the view worthwhile, however I do prefer what’s in the front. Now let’s check out the women.
Her Body Parts:
10 – Hair
9 – Neck
8 – Shoulders
7 – Hips
6 – Legs
5 – Feet
4 – Lips
3 – Waist
2 – Booty
1 – Breasts
So, there you have it folks…we’re all just cattle farmers searching for the next prized bull or cow.
Happy Yaoi Hunting!
Blak Rayne
Posted by Blak Rayne Books Blog at 10:53 PM