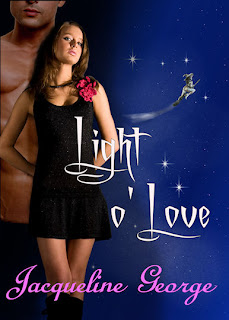 I love writing fantasy. It is like have four dimensions to play in. Characters can do things that are just not possible in normal life. The whole world can take on a colour that is surreal. Paranormal is simply so much more interesting than normal.

Mind you, I don’t like to go crazy about it. Push things a little too far, and you are in Batman territory, and he belongs in his comic books. I want my characters to be more real than that, to live ordinary lives alongside the magic. Fantasy with its feet on the ground.
Light o’Love was fun to write about. She is a normal girl, more or less. True she turns out to have a talent for getting into serious trouble, but she does have the character to get herself out again. She helps her friends and they help her, even if that means standing guard over her twenty-four hours a day. In this edited excerpt, she is enjoying a carefully supervised visit to the pub.
Light o’Love is under threat, and under guard. For a break, she is taken to the pub where she meets Tim, a close friend, and takes him to the corridor outside the toilets to share a sort of privacy.
She did not care if Holly watched. She kicked his feet apart and pushed in close to him, offering herself. For a moment, their foreheads rested together and then he kissed her. His arms wrapped around her and one hand was in her hair, pulling her closer and keeping her where he wanted her.
She broke off. “That’s better,” she whispered. “That’s what I’ve been waiting for.” She kissed him again. It made her blood race. She pushed closer, pressing the front of her body flat against his. She had not felt this excited since her first party years ago.
“Wait here,” she said to Tim, and stepped quickly into the toilet. Both cubicles were empty. She locked herself in and struggled out of her boots. Her tights followed and her panties. She was already wet, wet and desperate. She stuffed her panties behind the toilet cistern and tore a hole in her tights before pulling them back on. Back into her boots and she hurried out to Tim. He was waiting uncertainly in his corner. She went to him again. Nothing would stop her now. He hugged her to him.
“Touch me,” she whispered, moving back to give him space. “No, not there, silly. Lower.”
He did not know what she wanted. “Under my skirt, go on.” At last, he was touched her. He found the gaping hole in her tights and his fingers burrowed through her wetness to bury themselves inside her. She kissed him fiercely as he stirred her depths.
It did not take long. She buried her face in his neck as he gave her wild pleasure. “Stop, stop, wait,” she begged, pulling herself away from him and squeezing his hand between her thighs. “Wait. It’s too much.” She kept him at her centre and when he understood that he must not move, she relaxed and let him hold her.
“That was wonderful,” she whispered in his ear, and kissed him again. She could feel his cock hard in her hand, but it was difficult to reach. Growing frustrated, she tugged roughly until his cock sprang free and she could pull it out into the open. It straightened in her hand, alive and hard. It was hungry for her and as she ran her hand up and down its length, it cried slippery tears.
“Lift my skirt,” she said as she guided him towards her. She did not care that Holly was watching, or that anyone could see her and know perfectly well what she was doing. She pushed her hips towards Tim and led his rubbery plum to her clit. She shuddered as he slipped between her lips and into her wet centre. She lifted him hard against her pussy and it felt wonderful. She was rubbing herself backwards and forwards over the head of his cock, pressing him against her clit and sliding him the length of her furrow.
****
Her own body let her down. She could no longer control herself and her hips started moving erratically. With three quick pushes, she was coming, hanging on to him and burying her face in his neck to silence herself.
“Don’t stop, don’t stop!” he begged her, and she forced herself to keep moving. Her orgasm was taking her mind and she only vaguely heard him saying “Oh—oh—oh…” as his cock jumped and pulsed inside her. Clinging to him, shaken and with her knees trembling, she waited for the world to settle around her.
“Wow!” said Tim, and she giggled.
“Are they watching us?” she asked.
“I—I don’t think so.”
“I don’t care if they do,” she said defiantly. “I enjoyed that.”
She was entering the toilet as Tim got back to his friends. There was a roar of cheering, clapping and shouted comments. She could imagine the colour of his face. And, the colour of her face when she got back to her seat.
She wiped herself and stood before the mirror. Her hair looked untidy, but her comb was outside in her coat pocket. She did her best with her fingers. I can do this, she told herself, my name is Light o'Love and this is how I am meant to behave. She gathered herself and walked out of the toilet.
The noise came even louder than it had been for Tim, but she waved and smiled to her friends as she returned to her seat. “Is it my turn now?” shouted a male voice. She blew a kiss in his direction and sat down.
“Well, well, well,” said Holly quietly. “Light o'Love puts us all to shame.”
She shrugged and smiled. “Sometimes you just have to take what’s offered.”