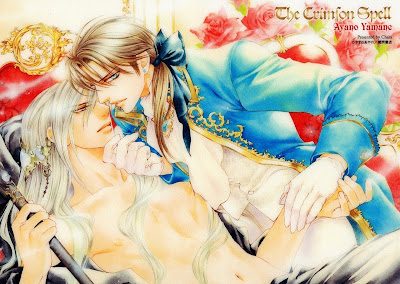 Crimson Spell - Yaoi Review
Crimson Spell, art and story by Ayano Yamane, is the tale of Valdrigue, a young prince who uses his father's cursed sword to save the capital of Areswies, a kingdom known for the creation of magical items. The sword places a curse on Valdrigue, gradually turning him into a demon. The only person supposedly capable of breaking the curse is the great sorcerer Hallwil. Taking a pair of specifically made armlets, that he locks on his wrists at night, which prevent the demon from escaping, Valdrigue leaves his kingdom to find Hallwil. After he finds Hallwil, the sorcerer promises to lift the curse if he agrees to accompany him on a quest to find certain magical devices he needs. One night, Hallwil notices the armlets on Valdrigue's wrists and opens them, releasing the demon. Of course, he finds the demon attractive and screws him, believing that somehow the curse will increase his own powers. Valdrigue doesn't remember the sex, and the curse turns out to he a hell of a lot worse than either of them expected. 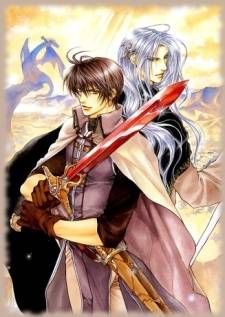 And, so on....
Ayano Yamane is also known for the Viewfinder series and Ikoku Irokoi Romantan (Foreign Love Affair). She's an excellent yaoi artist. I liked Viewfinder, but have a tendency to favour her Foreign Love Affair more. I'm not sure why, maybe it's the violence in Viewfinder, although typical for many yaoi, it turned me off in the beginning. Having said that Crimson Spell is great for eye candy, but the plot seems to meander everywhere aimlessly with no real substance, and the same applies to the characters. They lack depth. I don't have an aversion to Crimson Spell, but I just can't say it's the best yaoi I've read; it exemplifies a boy's love manga with the shallow, long-haired bishonen. Which makes it too predictable and boring. So, unfortunately, I give it 3 stars only!
Happy Yaoi Hunting!
Blak Rayne
Posted by Blak Rayne Books Blog at 12:04 PM