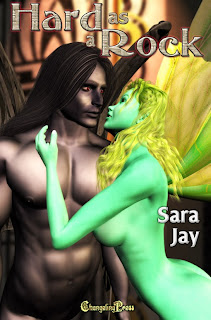 Hard as a Rock

Canna's heart belongs to the Pleasure Club's gargoyle statue--if only he were alive...

Canna, an impish, flirty faery, loves to service just about any client who enters The Pleasure Club, a futuristic sex club. But although the clientele is satisfied, Canna aches for the impossible. A sexy, larger-than-life gargoyle statue that happens to be a simple a décor item.

Basalt has spent centuries wanting Canna all to himself. Though his nightly visits train her to be his perfect lover, will she still want him when she finds out what he does during the day?

Her obsidian god stared back at her.

She shrank back down to human size and sighed.

The creature wasn’t real, of course. In fact, its purpose was mainly aesthetic. Few people climbed onto the fierce gargoyle guarding the doorway into the rest of the club. Canna certainly didn’t mind; it made him all the more her property.

Seven feet of black volcanic rock loomed over patrons’ heads. His mouth pulled back in a menacing growl, only partly open. Long black hair draped down his back as shiny and lifelike as any centaur’s. His half-extended wings nearly touched the floor. They flanked a trunk bulging with muscle and strength, scarred with streaks that must have been from being moved around over the years. Had he been a real gargoyle, the sculpture would undoubtedly lead his pride as an alpha.

His cock stood out and slightly upward from his body, shining with a black gleam. Longer than her arm, it had taken some getting used to even in her fairy form. Why bother magically stretching to accommodate such girth when the fill of it was so delicious, anyway?

She called him Goliath, like the giant brought down by a rock as solid as he was. As with every statue and machine in the Pleasure Club, he was warm and life-like to the touch. In previous centuries, his stature would crack beneath such use. Current standards for precious stones dictated chemical treatment for lasting durability.

That durability guaranteed her play toy a life nearly as endless as her own.

He often cooled in the daytime hours, however, which Canna attributed to lack of power. Some exhibits simply warranted less electricity due to their infrequent use. His volcanic glass could also be to blame. Had he been real, his stone body would cool during the day as well.

“My rock-hard giant,” she murmured, running her glittery green fingernails up his enormous bicep. Curling herself into his form playfully, she marveled at how their bodies practically glowed against one another. Her bare, sea foam skin and emerald hair sharply contrasted against his iron-like sheen.

Twirling back out to face him, her grass-green eyes sparkled up at his stone irises. His eyes bore back into hers, their inky depths casting dual black holes for her to fall into. The pupils had been etched quite realistically, with swirls of varying shades of ebony. Not for the first time, she sensed wild life within them.

For a second, he felt really alive, really there to take her and mark her as his Mate, forever. Hand still on his arm, she fluttered up toward his mouth, eyes never leaving his, as if pulled by his magnetic ore. Her lips grazed his open mouth, tongue sliding over his teeth and body quivering.