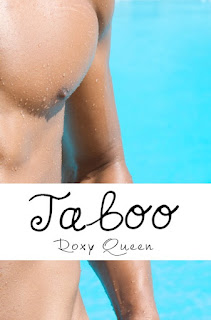 Taboo
by Roxy Queen
Blurb:
Who is he?
He’s the eighteen-year-old lifeguard at the pool.
I’m a twenty-eight-year-old woman babysitting for the summer, before going to grad school.
He’s one step away from jailbait (his birthday was eight days ago. Yes, I checked).
I’m not necessarily a cougar yet, but closer to cougar than high school girl.
He’s hot, and by hot, I mean holy crap. And by holy crap, I mean, when I first saw him, I thought he was twenty-one. Minimum.
But he’s not twenty-one. He’s eighteen and off limits. But he has this back and these shoulders and everything about him is yummy and I just want to touch him.
Once.
Excerpt:
“Softer,” I tell him. His face moves between my thighs and his beard feels thick and scratchy. I want him so bad it hurts, but he asked me to show him, so I am. After some fumbling around and a couple moments of indecision he found his rhythm and I found mine. His tongue feels hot and perfect. But I know if I don’t come soon, he’s going to end up with sticky shorts and neither of us wants that.
“Keep going,” I encourage him, feeling the rush from doing something so dirty. So immature and illicit. I haven’t made out in the back seat of a car since high school. The fogged-over windows give a false sense of privacy, but anyone could find us. Anyone. Then his tongue hits my sweet spot and my body starts to shake and shiver, the possibility of getting caught makes the pleasure more intense.
I’ve barely come down, when I see him on his knees, his dick tenting in his trunks. I pull them down, and his cock bounces like a spring. I open my already spread legs wider, giving him the green light. He moves frantically, like he’s afraid I may change my mind.
“Calm down,” I coax.
“Ouch,” he says banging his head on the roof of the car, trying to get fully free of his shorts.
“You okay?” I ask, but I think it comes out in a mushy giggle because I’m still high from the feeling of his tongue.
“Yep,” he replies. The look of determination, plus lust on his face, confirms that a bump on the head isn’t going to keep this from happening.
“You have a condom?” I ask, but he’s already searching for one. With trembling fingers, he rummages through his glove compartment, pulling the square package out. I pluck it from his hands and tear the wrapper. “Come here.” He hovers over me in the tight space, allowing me to roll it on. He jerks a little when my fingers touch his skin, trying to control himself, and I know he won’t last long, but I don’t care, I need him as much as he needs me.
He’s quick about it once he settles down, pushing in, burying himself to the hilt. I’m glad he’s big because he isn’t skilled. His enthusiasm makes up for it, anyway. His pretty gray eyes glaze over as he gets lost in my bouncing chest, and he sucks the sharp breaths out of my mouth with his kisses.  When he’s ready he grunts deep and sweet, faster and faster and faster until his face is in my neck and dirty words tumble out of his mouth.
Purchase Link:
http://www.amazon.com/Taboo-ebook/dp/B00BIW8PDI
Website Link: Facebook Roxy Queen
Posted by Blak Rayne Books Blog at 10:30 PM