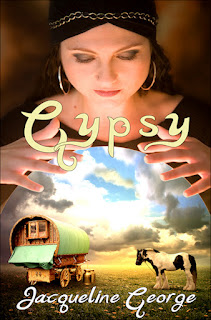 Gypsy
I had a gypsy caravan once. We had dreams of running a little holiday business, with customers renting out caravans by the week and clip-clopping along the lanes of Devon, in south west England. It was a bright yellow caravan, with painted ornaments all over. It was the prettiest thing, and comfortable too.
My favourite horse came from a real gypsy, who probably thought he was over-charging me. He was a stocky, coloured horse with the build of a Clydesdale, but he only just made fourteen hands. A powerful animal, well able to pull the caravan up hills.
He had a wall eye and a long fair mane, and I called him Jack.
If you really, really want to immerse yourself in romance, take a trip in a gypsy caravan along the by-ways of Old England. Jack and his caravan were as beautiful as a postcard. We would plod along, rarely doing fifteen miles in a day, enjoying the fields, woods and villages. When you take your time, there are so many things to see, and interesting people to chat with. You spend more time walking with the horse than riding, so you are pleasantly tired at the day’s end when you put your horse to grass and set about making your own dinner.
Then, to the light of an oil lamp, you tuck yourself into bed and listen to the nightly noises around you. If it is windy, the van will rock on its springs and send you to sleep.
It was time that stayed with me, and I just had to write about it. Gypsy is a romance between Virginia, who works in an office, and an old-fashioned gypsy she meets by chance in the countryside.
Excerpt ~ After a night of music, dancing and cider, Virginia is ready for bed...
John laid his fiddle in its case. “So, Ginny. Are you coming over to Somerset with us? It’ll be a grand trip, won’t it, Sally?”
Virginia’s head was floating. It may have been the music, or the moonlight slanting through the trees, or Sally leaning against her. Or it may have been the cider. No matter what, she wanted to go travelling. She wanted to see Jack in his harness again, pulling his painted caravan along the back roads of Old England.
“Yes. Yes, I’ll come. Just tell me when.”
John raised his mug to her. “That’s the way. Now, drink up and we’ll put you to bed.”
Sally pulled the blanket off her and allowed the cold in. Virginia had not intended to stay but now - now she had nothing to say. A little cider would have done no harm, but now the bottle was nearly empty and it was too late. She wanted to lie down.
Sally pulled her to her feet. “Come on, love. We’d better get you to bed while you can still walk. Give us a hand, John.”
They led her around to the front of the caravan. Suddenly the long step up seemed too much trouble.
“You’d better go first, Sally, and pull her up.” Virginia felt confused as Sally pulled her up and John pushed from behind. The little caravan was dark and secret, and rocked on its springs as she moved. Sally led her to the bed shelf at the back and put her hand on its rail. “Here, hang on to this and we’ll get you sorted in no time.” Then, looking past her, she said, “Bugger off, John. Give us a few minutes.”
Virginia looked at the cosy bed and said, “But I can’t. It’s John’s...”
“It is too, but I’m sure he won’t mind. You won’t either.”
“But where will he sleep?”
“Right here, of course. If you let him sleep.”
“No, he’s - I mean - you. Oh, you know. He’s yours, and I couldn’t.”
“Sure you can. It’ll be fun, you see. And he belongs to no-one. Certainly not to me, anyway. Now, let’s get this off you.” She pulled the blouse over Virginia’s head, and unhooked her bra. She fumbled for the draw-string at the front of Virginia’s gypsy skirt, and slipped it and her panties off.
“Well, well, what a pretty lady you are, love. Hop into bed. I’m going to light the lamp.”
Virginia clambered onto the bed and lay on her back. The miniature window in the back wall of the caravan let moonlight in. She heard Sally strike a match and she could see her face clearly in the lamp light as she concentrated on adjusting the wick. The caravan’s arched ceiling softly reflected the light. Sally hung the lamp from a hook and went to the door. “We’re right, John.” Virginia heard him answer from the distance.