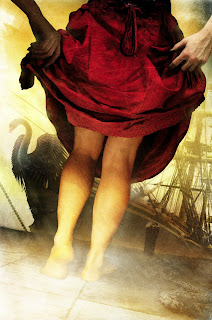 The Flight of the Black Swan: A Bawdy Novella
By Jean Roberta
(Lethe Press, 2013)

What happens when an adventurous young lady in Victorian England is invited to cross the Atlantic with a group of gay sailors in a stolen ship? She accepts!

Imagine an upper-class English girl kidnapped by pirates when she was eleven, and eventually returned to her family. If this sounds familiar, you’ve probably either read the classic book A High Wind in Jamaica by Richard Hughes, or seen the movie. Whatever you may imagine, Jean Roberta has taken the grown-up Emily far beyond your—or the younger Emily’s—wildest speculations. This is, indeed, a “Bawdy Novella,” but there is more to it than that. Emily is a smart, spirited heroine, adventurous enough to see the bright side of the unspoken (and unfounded) assumption that she must be “damaged goods.” When her romantic affair at a girls’ school is abruptly ended because of her lover’s cowardice, Emily tosses off the constraints of nineteenth-century English society and returns to the sea on a more-or-less pirate ship, the Black Swan, manned by gay fugitives from the British Navy.

I was used to keeping to myself, so for the following three days, my family didn't seem to find me unusually reclusive. As the hours dragged by, my heart ached even as I longed to breathe salt air again. I composed the following letter:

I hope it shall please you to learn that I have accepted a proposal of marriage from Mr. John Greenleaf, a former Officer in the Royal Navy. Please forgive me for answering him so quickly, but a higher Principle is involved. Mr. Greenleaf holds sacred the Free Will of all God's creatures, whatever they are called. He has arranged passage on a ship to America to fight in the War against Slavery in the Southern States. I have agreed to accompany him. Please try not to worry about me. I shall write to you again as soon as I am able.

P.S. Please share this news with the younger ones.

I copied this out in a clear hand and placed it in an envelope that I left on my pillow. I packed a satchel that I thought my family could spare. Not a single gown, corset, hoop, petticoat or bonnet could fit into my baggage, and I had no desire to wear such garments on board a ship.

Shortly before midnight, I slipped out of my parents' house, dressed in a pair of trousers and a shirt that I had made for myself, covered by an old frock coat and a hat of my father's with my hair tucked underneath. I hoped that passersby would mistake me for a young man.

I arrived at the harbor for my rendezvous with my two new friends. I felt very small in the shadows of tall masts, lit by moonlight. A familiar baritone voice lilted in the darkness:

"The sea runs high in the west, Nellie,
And the wind is cold and keen.
True lovers all are blest, Nellie,
So keep your nightgown clean."

The ditty was "John's" signal to me. I walked quickly in the direction of his voice.

The Black Swan was a gallant three-masted wooden frigate, rocking gently at anchor like a debutante waiting to be presented to Mother Ocean. "John" had told me that it was in ordinary, waiting to be called into active service as the Navy outfitted warlike ironclad ships propelled by steam engines. He surmised that our chosen vessel was scheduled for retirement, and would therefore be considered less worthy of pursuit than a more valued ship.

"Emily?" asked my fiance. "How curious you look. But how wonderful to see you." He turned aside from me to avoid bursting into laughter.

"Laugh if you like, man" I answered. "Did you expect me to arrive in full rigging, with petticoats as wide as sails?"

The man gave me a kiss on the cheek and a proprietary hug. "But darling, we are to be married directly. Didn't you think--well, appearance is an illusion after all. I defer to your practical mind."

"James" approached as though unsure of whether I was the same woman he had met in Hyde Park. "Emily?!" he exclaimed. He looked at the division between my trouser legs, and turned tomato-red, as was his wont. "I say, this is really -- you look like a lad!"

"I'm dressed to travel with men!" I told him.

"But we were relying on you to--" he stammered. "Of course you're right, dear, you must dress for comfort and not for style. Welcome to our good ship, Emily."

I noticed dozens of men loading supplies onto the ship. These were the Green Men, the ones who were everywhere denounced as unnatural, and yet they looked as capable a crew as could be found. Some revealed themselves by the flamboyance of their gestures while discussing the disposition of stores meant for a long voyage, some by the sweetness of their voices, whilst some appeared as masculine as boxing champions.

Any magistrate in the city would condemn them all to the gallows! Words could hardly express my emotions as I saw them to be, in the words of the old song, "alive, alive-o."

"We must christen our good ship," said "John," "and exchange our vows, and set sail without further delay."

Lanterns swinging in the hands of the men fitfully illuminated various parts of the ship's deck and hull. I looked for her name and saw it painted on her side more crudely than seemed to befit a ship of the Queen's Navy. Her figurehead, a long-necked swan that gleamed black in the light reflected from the water, appeared as smooth as onyx. The ship, like its human cargo, was intended to escape detection.

"James" followed my gaze, and offered me his arm. "Emily dear," he began, "have you ever observed the grace of a swan's progress? And have you considered the impression made by any creature set apart from its fellows? That is how we think of our ship. She's like a black swan, proud of the natural plumage that distinguishes her from her snow-white sisters. Like us, she prefers the cloak of darkness."

Thank you for the great excerpt, Jean! I wish you all the best! Blak Rayne
Posted by Blak Rayne Books Blog at 11:00 PM