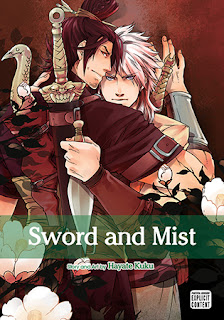 'Sword And Mist', story and art by Hayate Kuku has a Chinese theme, and takes place a thousand years ago, during the Tang Era. Zhen is an assassin, or a black wolf from the southern tribe. He's also big, brawny, and kind of a raw looking character, definitely the seme.
While he's eating dinner a merchant tells him about the tyrant who controls the village, Inspector Rouchen. Zhen questions the merchant's story, and wants to know why the inspector is able to drink in public—basically get away with things that no one else can. The merchant points out a beautiful woman called Hualei, the top courtesan at the pavilion, and explains that Rouchen is showing off for her benefit, because he wants her. Zhen sees Hualei and agrees she is beautiful, and he wants to learn more about her and the supposed relationship she has with Rouchen.
Zhen pays for his meal and sneaks into the pavilion to meet Hualei. He talks to her, gets a little too close, and she knocks him almost off the balcony. Of course, he's immediately infatuated with this powerful woman; he's impressed and likes her aggressive behaviour. Then, Rouchen shows up and gets fresh with Hualei. In order to stop his unwanted advances, she claims she's a virgin, and the inspector promises he'll teach her how to please a man, and he departs. Zhen enters the pavilion again, he's jealous of Rouchen, and offers to kill him, if Hualei will be his. He kisses her somewhat forcibly, they fight, and Zhen finds out Hualei is not a courtesan, but actually a man and an assassin, or white wolf from the northern tribe.
The story progresses through each chapter, and yes, there is a HEA ending. Wu (Hualei) is what I call a feisty uke, as he's the one to chase Zhen, instead of the other way around. He's also the one to first admit his love for Zhen.
I admit, visually speaking the art is kind of rough around the edges—certainly not perfected as some of Hayate Kuku's predecessors like Youka Nitta and Kazuma Kodaka, and the one-liners are laughable, but I didn't feel those things took away from the story's charm. Sword And Mist is five chapters of true romance integrated with light-hearted humour. I found the characters likeable, the plot well thought out, the art acceptable, and there was enough hot, sweaty man sex for any yaoiholic. I thoroughly enjoyed this yaoi and will give it 4 stars for being such a fun read!
Happy Yaoi Hunting!
Blak Rayne
Posted by Blak Rayne Books Blog at 12:19 AM