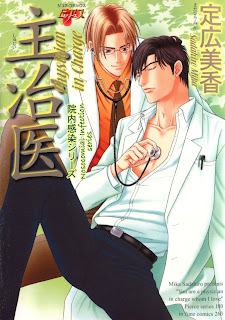 First and foremost, welcome to BRB, everyone! It's Good Friday, which means this coming weekend is Easter. I hope the holiday is pleasurable, if you celebrate it. If not, whatever you plan to do this long weekend, enjoy! Shujii is a yaoi I read some years ago but never bothered to review. Anyway, I found the art pretty, and decided to reread it yesterday, which took me a total of twenty minutes. Here's my review!
In the yaoi Shujii, main character Yagi Tomoya was involved in a bad car accident. During reconstructive surgery he died, which restricted the flow of oxygen to his brain and, as a result, he suffered mild memory loss. He wakes in the hospital to a strange array of what he believes are dreams, where he's having sex with a man. Other than those dreams, Tomoya has no recollection of the accident, his marriage and his daughter, or that long before his mishap he'd been having an affair with a colleague, and fellow physician, Sawamura Iori. 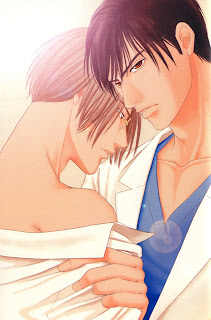 Of course, Iroi becomes the primary physician or 'physician in charge', taking responsibility for Tomoya's rehabilitation as well as his sexual needs. Iroi doesn't care about Tomoya's wife or anything else, he's in love and desperate to keep what is rightfully his, and Tomoya has trouble admitting, but his sentiments are the same. The story continues and has an HEA ending. And, as a bonus, the author added two back-stories called The Thorn In The Heart and Dr. Yagi's Clinical Records, both of which are about Tachibana Sou and Sugino Shuuichi, young lovers who are connected to Tomoya and Iori.
Shujii, or as per the English translation, Physician In Charge by Sadahira Mika, isn't some epic romance nor does it have a particularly in-depth plot, but for all its shortcomings this yaoi does have pretty characters, an interesting back-story, and lots of sex, making it a fun read. I give Shujii 3.5 stars!
Happy Yaoi Hunting!
Blak Rayne
Posted by Blak Rayne Books Blog at 11:29 AM