Come Together In Vein-Fire In The Blood #MMF 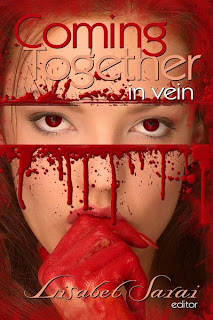 Welcome, everyone! It's Friday, but even better yet, my guest today author Lisabet Sarai is giving away a copy of her novel 'Fire In The Blood' an MMF with vampires! All you need to do is leave a comment that includes your email address. Comments without emails will not be eligible for the drawing. So don't forget...leave your name and email address in the comment section and you might win!!

Many authors use a nom de plume, and they may use one opposite to their own sex. Do you think an author's sex or sexual orientation should dictate what genre they write?
Definitely not. I write M/M fiction under my recognizably female pseudonym. If that bothers readers–well, I just don't care. I think that's a very narrow-minded perspective. I have enough trouble managing two identities–my writing identity and my real world identity. Adding different pseudonyms for different genres would just be impossible!
Meanwhile, I believe that sexual orientation is a continuum rather than an absolute, and human beings have common desires and fears regardless of whether they are straight, bi or gay. I find writing M/M or F/F fiction just as easy as M/F, because I am focused primarily on emotions and relationships, not actions.
I've had gay men praise my M/M stories as genuine and believable. I really value the compliment.

Some authors have issues with character development, writer's block, plot summary etc. What is the biggest challenge you face when writing? How do you overcome the problem?
One of the aspects of writing I find most difficult is conveying action. I tend to live in my characters' heads more than their bodies, so I have to remind myself to describe what they are doing, as well as what they are thinking and feeling. Also, action is often a very effective as a tool to communicate emotion. I need to learn how to exploit this with greater skill.
How do I overcome this? I guess I have to remind myself, as I'm writing, to pay attention to this aspect of the story. It's a question of practice. I suspect I'm better at this now than I was four or five years ago.

What has been the single most successful marketing tool you've used to date?
Measuring marketing success is quite difficult. Tying that success to particular activities is even more so. I do a lot of blogging, both on my own blog and as a guest, and I run frequent contests and giveaways. I use the contests as a mechanism to increase the size of my mailing list. I have over two hundred readers on that list now, added one by one over time.
Another thing I emphasize is networking with other authors. I encourage them to visit at my blog and vice versa. Since each author has a different set of readers, we each gain exposure this way. I've done a few blog hops – including one I organized at the beginning of the year with Jennifer Wright – and this is a kind of supercharged networking process (though pretty exhausting!)

What are you currently reading?
In the erotic realm, I'm reading the succubus anthology Seductress edited by D.L. King. It includes some great stories, although I think the theme is a bit constraining. As I noted above, I like variety. I'm also about halfway through Jonathan Lethem's The Fortress of Solitude, a novel about a white boy growing up in predominantly black Brooklyn in the 1970's. Lethem is one of my favorite authors, ever since I read his bizarre and creative scifi noir novel Gun, With Occasional Music. Each of his books is distinctly different. This one is a bit of challenge for me, because I'm not particularly familiar with the setting and yet Brooklyn is almost one of the characters.

How do you measure success?
Personal success, or success as an author? Personal success, in my opinion, comes from having work you enjoy and people around you to love. I'm fortunate to have both in abundance.
Success as an author is more difficult to define. I recently became aware that I was “settling” for a fairly low level of sales. I wasn't willing to believe that I could do better. I now have a goal to increase my monthly royalties by five times by the end of the year. Sounds pretty ambitious, I know, and to be honest, I have no idea how I'm going to do this. My first step, though, is to believe that I can have that level of success – to stop sabotaging myself by setting my expectations too low.

What is your favourite drink?
That really depends on the time of day LOL. But I do love a glass of a good Côte de Rhone or Pinot Noir.
Are you a cat or dog person?
I'm definitely a cat person. We have two, and they're precious parts of my life. I can see the appeal of a dog, as they're more of a “participating” species. You can go walking or traveling with them. Cats, on the other hand, tend to be observers. However, cats are so much more aesthetically appealing – elegant, clean and refined. I shudder to think about having a dog in my bed but our cats are very welcome.
Love or lust?
Both please! In the ideal case, the two are closely entwined. That's what I try to convey in my books.
If you could spend the day with any famous author, who would it be? And, why?
Hmm, that's tough. I'm not sure I'd want to spend a whole day with any famous author. They're notoriously hard to get along with, or so I've heard! I'd like to meet Anne Rice. I've read almost everything she's written, including her more obscure novels like The Mummy, The Feast of All Saints, Belinda and Exit of Eden. Her erotic inclinations are mingled with spiritual inquiries, like my own. I'm impressed by her imagination, her courage (writing BDSM long before popular authors were brave enough to do so), and her ability to bring subtle emotions to life.
If you could indulge free of any consequences, what would be your ultimate sexual fantasy?
Hmm. I'm not sure I want to share this. I'd shock too many readers!

Coming Together: In Vein

From “Vampires, Limited” by Lisabet Sarai

In Coming Together: In Vein

He was so close, she should have felt the heat of his body, but it was as if a mannequin was pressed against her, instead of a living person. She could smell him, though, a sharp grassy scent that made her think of the country and wide open spaces.

Casually he trailed a finger up the side of her neck and circled her earlobe. A shiver raced through her, winding tight around her nipples, spiraling down to her sex. He nipped at her ear, playful, but hard enough to make her gasp. “As for me, you know who I am, don’t you? Or at least, what I am.”

Lara knew what he was saying. She just couldn’t accept it.

“Here.” Still behind her, he grabbed her hand and placed her fingers on his throat. His skin was cooler than the air, cool and smooth as marble. “Do you feel any pulse?”

“No―but―it’s just not possible. It’s just a myth. A fashion, a fad. Everyone these days pretends...”

He brought her wrist to his lips, flicking his tongue over the spot where the veins were closest to the surface. His mouth was hot, unlike the rest of him. A violent shudder of desire rocked her body. “Close your eyes,” he murmured.

I should call off this farce now, Lara thought, but she obeyed anyway. Something pricked at her flesh where he held it against his mouth, the tiniest sting, hardly deserving the name pain. Then there was heat, and a pulling, not at her wrist but somehow at her heart, which leaped up in response and began to pump at twice its normal rate.

Red flooded the space behind her eyelids, scarlet, crimson, three-dimensional eddies of color like billowing clouds. A brief icicle of fear stabbed at her, then melted as warm, sweet pleasure flowed through her limbs. Her nipples, her pussy, everywhere there was this hot, wet current, aching and yet somehow not urgent.

“Relax,” he whispered. “Let go.” She heard his voice, coming from a long way off. She saw his eyes, burning through the red haze. They had darkened from blue to empty black. She felt herself tumbling into their depths.  Some last fragment of self-consciousness cried out for her to resist, but she ignored it. He was too strong, his will irresistible, the gifts he offered too precious to refuse. She let herself drift. He cradled then released her. She felt herself beginning to drown in the scarlet river of his blood lust.
The shock of separation drove black spikes of pain into her temples. She opened her eyes, gasping for breath. Motes of red swam in her vision. She twisted around to look at him, in wonder and terror.
“Sorry,” he shrugged. “I didn’t know how else to convince you.”

Thank you so much for doing the interview, Lisabet! And, what an awesome excerpt! ~Blak Rayne