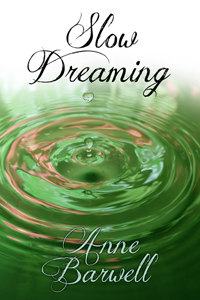 Slow Dreaming
Blurb:
As an agent for the Tempus Institute, Jason Adams’s task is to observe the past, not change it. But when he’s sent to 21st-century Wellington, New Zealand, during the last week of aspiring songwriter Sean Henderson’s life, Jason finds he can’t just watch from a distance. He and Sean quickly become friends and then lovers, and when the song that's haunted Jason for years connects them in a way he never anticipated, he'll risk changing history for the chance of sharing a future with Sean.
Excerpt:
One more screwup and he’d find himself stuck down in the stacks forever. Time travel was a risky business; the timelines were definitely not something to be interfered with just because someone was curious or got double-dog-dared.
In hindsight, admitting to tapping that guy on the shoulder because of a dare had not been one of his brightest moments. How was he supposed to know what would happen next?
Sure, he could have read the paperwork attached to the assignment, but he’d never been one for that. Nor had he felt the inclination before now.
But then there was something about this assignment that was different. As soon as he’d seen the photograph he knew he couldn’t turn it down.
Outside, the heavens opened, rain dancing on the roof as though in a mad tango with a full orchestra complete with timpani behind it. Water pelted against the window, people scurrying across the road seeking shelter. He loved this time and Wellington in particular. It was simpler, nature as it was meant to be before man had begun to control everything. He stood, drawn to the rain, intending to experience it up close, wondering if he dared stand outside, let the water just run over him and throw his hands open to the heavens, or whether it would draw too much attention to him.
A loud clatter interrupted him. Someone swore, papers flying in all directions, several heading toward the door as it opened again, bringing with it a sudden gust of wind. Without thinking, Jason bent to help pick them up, crawling under the table next to his and knocking his head against someone else’s in the process.
“Umph.” The voice was male, although not deep. Gray eyes, framed by glasses, met his.
Jason backed away quickly, letting go of the piece of paper he held. “I’m sorry,” he mumbled, ready to help his unfortunate victim to his feet.
“No problem.” The man retrieved the errant piece of paper. Jason got a glimpse of scribbled words, crossed out in places, circled in others. “There you are!” His companion turned, bending to pick up the last of the papers and giving Jason a view of a very nice firm behind at the same time.
He swallowed. This should never have happened. Two days in, and he’d done the very thing he was instructed not to do.
His assignment turned toward Jason and smiled, holding out his hand. “Thanks for your help.” His eyes crinkled at the corners before he indicated Jason’s now empty coffee cup. “Let me refill that. It’s the least I can do. I would have been screwed if I’d lost all my work. The name’s Sean, by the way. Sean Henderson.”
“Jason Adams.” Jason shook Sean’s hand. Hell, why not? He hadn’t initiated this, and it would look more obvious if he refused the offer. Anyway, it would be impossible to watch the guy if he left now, and saying no would be just plain rude.
Purchase Link:
http://www.dreamspinnerpress.com/store/