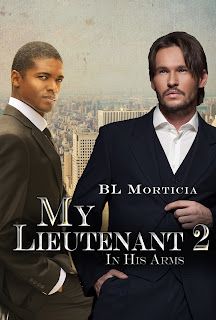 My Lieutenant 2: In His Arms and an Xmas Gift!
BLMorticia

Good mornin’ readers. Thanks to Blak as per usual for having me. Can I tell ya’ how excited I am to have a new release? Haven’t had one since June and I’m getting’ downright twitchy. o.0

Sorry I been writin’ gay cowboys lately so I’ve adopted the speech. More on that in an upcoming post. In the meantime, my new book, ML In His Arms is about to release and as a special Xmas gift, I’m doing a free read for my favorite couple called, ML Xmas in New Orleans. Yeah, it’s kind of sappy. But everything I do with them is just that! *winks* The two men love one another more than any other couple I’ve written. It might be because they’re my very first gay couple but who knows? I enjoy writing the two of em and look forward to doin’ more free reads in the near future.

For now, have a look at the next My Lieutenant and look for the free read on All Romance and Smashwords around the 10th of December!

Nathan Ellerby and Lt. Bryant Duncan are at it again. This time, the story shifts from Nathan to Bryant who’s looking to solidify his relationship with his favorite artist. The Lieutenant wants to take Nathan everywhere. To visit his naval friends, his parents who still aren’t happy about his decision to come out, as well as his best friends Mike’s bachelor party. Bryant refuses to hide his man from the masses and despite his man’s insistence on the unimportance of the matter, Bryant pushes on.

Thanks for the great post, BL! All the best. ~ Blak Rayne
Posted by Blak Rayne Books Blog at 11:30 PM

Email ThisBlogThis!Share to TwitterShare to FacebookShare to Pinterest
Labels: Novel Bl Morticia, book promo, My Lieutenant 2 In His Arms