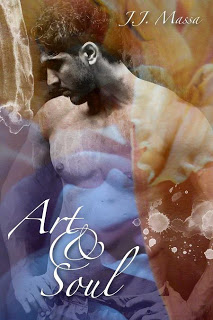 Art and Soul
By: J.J. Massa
Blurb:
Oliver Crane is a success. He enjoys making movies--losing himself in a new role every few months. Acting allows him to express so many facets of his nature. Dark and intense, he lives his work as the screen's ideal leading man. What woman wouldn't want to spend the night in his bed? For that matter, how many men could say they didn't want him?
Not Thorbjörn Frisk. Or he wouldn’t deny it, if anyone bothered to ask him. A Swedish artist who immigrated to America in his late teens, Tor often loses himself in his work, avoiding the harsh realities of impatient and intolerant people who have no use for a stuttering sculptor who barely speaks English.
Each man has invested his very soul into his art. What will it cost in the end?
Excerpt:
…Tor moved back for a broader view, bumping unexpectedly against something solid.
“What the hell?” a strange voice shouted. “What’re you doing? You got…sludge all over me!”
The new voice and unexpected impact caught Tor by surprise, causing him to stumble grabbing onto the now-gaping stranger. Only, this wasn’t truly a stranger. While he’d never met the actor, everyone knew Oliver Crane.
Dark hair, square jaw, piercing blue eyes, muscles in all the right places, the man was a god. Currently, however, the god appeared blanketed in what amounted to mud. Expensive mud, but mud just the same. Tor, on the other hand, was covered in... Well, he was covered by Oliver Crane. He definitely had the best part of the deal-or so he thought, until he looked into those raging blue eyes.
“Mm. Ah,” he squeaked, before trying again. “Hallo. What b-b-brings you t-t-to m-my verkstad?” At the arching of one dark brow, Tor quickly supplied the translation. “Ah, Verkshop. Stu-d-d'yo. Studio.”
The burning eyes narrowed before their owner fluidly lifted himself from atop Tor. Before Tor had time to miss his presence, Oliver reached down pulled him up, setting him quickly on his feet.
“I’m lost,” the famous voice snapped impatiently. “Your neighbors seemed to think you were the go-to guy for directions.”
“I-I cannot imagine why,” Tor mumbled pushing his overlong bangs aside. “Vart -g-går d-du?” he asked. “Where g-going?” he tried again. He’d been in this country long enough; he should be fluent by now. Except his thoughts and words always reverted to his native tongue when flustered or nervous. Worse, his stutter increased as well.
Intense eyes studied him, pinning him in place, afraid to breathe. “I’m going to Yankee Stadium,” the actor ground out.
“Oh! This I know,” Tor announced, pleased. “I can show…”
“Can you just write out some directions?” Oliver snapped, sweeping Tor with another scathing look. “Just draw me a map.”
The words might not have been intended to hurt, but they did.
Turning away, Tor shuffled through papers cluttering desk. He hated being so bumbling. Art was his world. Art didn’t judge, only accepted.
"Look, I'm sorry, guy," Oliver began, only to become trapped in the artist's eyes. Trapped? Drowning.
The slight blond who'd been looking for whatever had lifted his gaze to lock with Oliver's. Those eyes were beautiful, a pale, sea-foam green, and was that the sheen of tears? Had he done that?
He cleared his throat, unconsciously lifting his hand to trace the ridge of his companion's cheek.
Oliver opened his mouth to speak and failing. He stepped closer to the other man, letting his palm drop to a slim shoulder.
"V-Vart går d-du?" the man squeaked out as he had earlier, when his lean, toned body had been fitted so neatly against Oliver's. Taking a step closer, nothing more than denim and heat between them, Oliver leaned down, skimming his lips across the taut skin of that razor-sharp cheekbone.
"No," he groaned. I can't do this."
Purchase Link:
Amazon/J.J. Massa
http://www.jjmassa.com/
Posted by Blak Rayne Books Blog at 10:42 PM