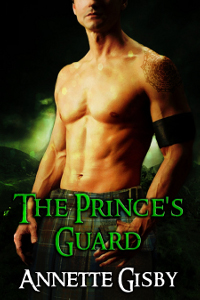 Good morning, sweeties! And, for those of you living North of Sixty, I hope you had an excellent Thanksgiving weekend. Ours was quiet. We did the big family dinner on the Friday, while my parents were in town. Anyway, my apologies for not getting this interview up sooner, but the author and I had a mix-up. My guest today, is a very sweet lady, and another author after my own heart, because she writes M/M, my favourite! lol So, let's get the party started! Welcome, Annette!

Website Link: http://www.annettegisby.n3.net
The Prince’s Guard
Blurb:
Prince Dashan has been used to getting things his own way, with servants to cater to his every whim. As the crown prince, it is essential that he is protected and he is followed everywhere by his bodyguard, Ryland. Dashan can't even head to a tavern with his friends without Ryland somehow turning up and spoiling his fun.
Dashan disguises himself as a peasant one night and sneaks off to the brothel that he's heard rumours about - a brothel that caters for men who like men. The prince finds it difficult to admit to himself what his true desires are - he yearns to submit his will to someone else. And Ryland is just the man to show him what that truly means.
Excerpt:
Dashan’s face darkened as he thought of Captain Ryland. Just because he was captain of the King’s men-at-arms, he seemed to think that meant that he was the boss of the princes too. Officially, he was Captain of the Guards, unofficially he was Dashan’s bodyguard and Dashan railed at that fact. Everywhere he turned, there was Ryland getting in his way and preventing him from having any fun. Dashan couldn’t remember the last time he’d seen his friends or even visited a tavern without Ryland tagging along or turning up. He put a pall on everything, like a mourner mistakenly turning up for a wedding feast rather than a funeral.
“What about the Alradai? If there are any of their spies about, you could be in serious trouble. That’s why Father wanted you to have a bodyguard in the first place. You could start an international incident if you get kidnapped. The Alradai would love to have the crown prince as a hostage. They’d like nothing better for us to be at war again.”
“No one’s going to know I’m a prince,” said Dashan, frowning. “I’m just an ordinary peasant out to enjoy an evening at the tavern.”
“And maybe a wench or two, eh?” Aniel winked at him.
“Maybe,” Dashan agreed, although he knew he was lying to himself and his brother. For a long while he’d suspected that the female form wasn’t where his interest lay. Instead of spying on the maids like his brothers sometimes did, Dashan was often to be found watching the soldiers and men-at-arms at their drills. He much preferred it in the summer when they would remove their armour and shirts, practicing their arms in little more than their kilts. It was strong, firm chests Dashan dreamed of, not flowery scents and softness. He wanted someone strong, someone forceful, someone so passionate that they forgot he was a prince and just ravished him. The trouble was that the only person he could imagine being as forceful as that was Ryland. Dashan scowled, he doubted Ryland had a passionate bone in his body. He was just annoying. Dashan couldn’t wait to be rid of him. Ryland riled him like no one else could.
No one thought it odd that the crown prince spent so much in the men’s company, after all once he was king, they would be his men to command and his father just thought he was being friendly to the men who would serve him. The trouble was, Dashan wanted to be more than friendly. He wanted much more, but the castle was a hotbed of gossip, so there was no one he could approach without word of it getting back to his father. He’d heard that in the lower city there were places you could go to, pleasure houses that catered to every patron’s whim, male or female.
Dashan knew what he wanted and tonight he was going to get it.
Purchase Link: http://www.smashwords.com/books/view/210787
Publisher Link: http://www.smashwords.com 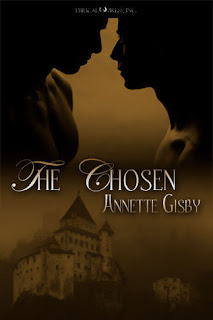 Thank you so much for stopping by, Annette! All the best of success, hun! ~ Blak Rayne
Posted by Blak Rayne Books Blog at 10:28 AM