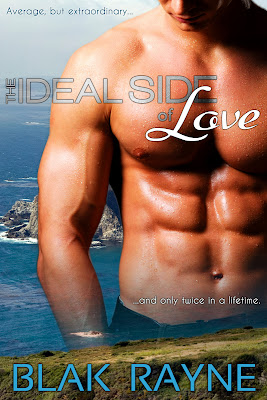 Blak Rayne: My Next Big Thing
Last Wednesday my friend and talented author Deborah Court tagged me to answer 10 questions about my upcoming release, "The Ideal Side of Love", the first in a possible two-part story. To read about Deborah’s own Next Big Thing, her upcoming romance you can visit her blog!
Here's some info about my own "Next Big Thing" I'd like to share with you:
What is the working title of your book?
The Ideal Side of Love
Where did the idea come from for the book?
Years ago, while driving home from Vancouver, and I should mention, I was doing 70 in a 50 zone, this police officer forced me to pull over for speeding. Actually, he jumped out in front of my car and I had to slam on the brakes to avoid running him over. Anyway, after a mild argument, and me giving him shit for doing something so foolish, and scaring the hell out of me, I received a ticket. He was a very attractive man, and after he left, I noticed he’d written down his personal phone number on the back of the ticket.
And, as for the rest… I’ll never tell. LOL
So, that is where the idea came from for ‘The Ideal Side of Love’. I can’t divulge anymore or I’ll spoil the story. You’ll just have to read it!
What genre does your book fall under?
Basically it’s a gay, romantic drama. But it can also be tagged under LGBTQ, M/M, gay erotica and gay fiction among many others.
Which actors would you choose to play your characters in a movie rendition?
Bad question. I sincerely hate trying to pick out actors who resemble my characters. I never use anyone famous as a role model for my characters, most are based after real people I know or have known. So, sorry, but I don’t have a clue.
What is the one-sentence synopsis of your book?
After the death of his husband, Stephen Pritchard readily accepts that friendship, sex and love–everything that constitutes for a lasting relationship will never be his again, until he meets Carson, twice.
Will your book be self-published or represented by an agency?
Self-published under Blak Rayne Publications Ltd.
How long did it take you to write the first draft of your manuscript?
Not too long. The original draft was written in a couple of months.
What other books would you compare this story to within your genre?
Good question; perhaps Andrew Grey’s ‘Accompanied By A Waltz’, or Rodney Ross’s ‘The Cool Part of His Pillow’. And, the only reason I say this is because the protagonist in each of these novels looses their lover, just as Stephen does in my novel.
Who or What inspired you to write this book?
I thought I’d write a story based–and that’s loosely based, on a personal experience and, of course, I also embellished. My life certainly isn’t near as exciting as Stephen’s, though I did find it interesting to write in first person POV and from a male perspective.
What else about your book might pique the reader’s interest?
For anyone who’s a local, or an entrepreneur, they might find the book enjoyable since the setting is based in the North Shore, and Stephen is a self made individual.
Next Wednesday (October 24th), my fellow author Sylvia Massara will tell you about her "Next Big Thing" - make sure to check out her awesome blog!
Happy Yaoi Hunting!
Blak Rayne
Posted by Blak Rayne Books Blog at 11:00 PM