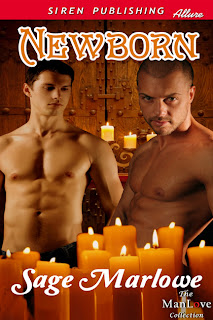 First of all, thank you, Blak for having me today - I don’t get out of my writing cave often, so a guest blog appearance is a huge thrill for me!

If what you love the most and what you hate the most become the same, which emotion will win?

Imagine you meet someone who holds the power to change your life. They make you reconsider your values, your choices, and your entire look at life. You ultimately find yourself falling in love with that someone but then you realise that there is something about them that goes against everything you believe in. Got an idea? It can be anything you like, but I’ll give you some examples: Religious beliefs. You want a monogamous relationship, he wants to date other people. He’s a soldier about to go abroad and risk his life while all you can do is stay at home and wait. You get the idea.

In Newborn, Parker Rowe finds himself faced with the ultimate dilemma: He hates vampires with an intensity that has made him chase and slay every single one of them he could track down for years. He is filled with bitterness, hatred and the burning need for revenge. Those are the only emotions he has been capable of feeling for almost a decade - until he meets Josh. Josh Summer is everything Parker isn't, or rather, the parts he has lost. Josh is pure, innocent, and sweet-natured. He is also quite a bit younger than Parker and sexually inexperienced, but very happy to change that. In short, he is the one who finally brings the summer back into Parker's heart and replaces the darkness and void in it with feelings of love and affection.

I can't tell you what happens next without spoiling the story for you (although you can probably guess…), but something happens that makes it practically impossible for Parker to even be around Josh, let alone continue to have a relationship with him. And yet, the spark of love this sweet boy has ignited in him simply refuses to die, little by little lacing Parkers' world of black and white, good and evil with rays of sunshine and the warmth of love. Once opened to positive feelings, his heart and soul crave more - but will this spark be enough to make him overcome all the walls he has put up or will it take more to make him understand that nothing is ever only what it appears to be at first?

Parker Rowe has hated vampires with a passion ever since his family was murdered by a gang of malicious vampires, and he has been trying to hunt down the culprits for years.

A promising clue leads him into a small, secluded town where he meets Josh Summers. Sweet and innocent, Josh is as much out of place in Parker’s world of revenge and violence as he is in his own narrow-minded community, but he can give Parker the peace of mind he craves. When the vampires Parker is chasing use Josh to deliver a very special message, Parker finds himself facing the ultimate dilemma. If what he loves and what he hates the most become the same, which emotion will win?

While Parker struggles to accept the changes his lover goes through, he comes closer than ever to detecting the truth about his family’s deaths—but then his own life takes a dramatic turn…

Excerpt:
This scene finds Parker and Josh at one of my favourite moments in a relationship - that magical first kiss...

Parker leaned in close enough to stir the short hairs behind Josh’s ear with his breath as he spoke. “I want to fuck you, Josh. You do know that, right?” He raised his hand, cupped Josh’s cheek, and tilted his face up so he could look into those soft chocolate eyes. “So what do you think?” His free hand landed on Josh’s hip, just an inch or so from the tempting curves of his buttocks. Josh made a soft, helpless sound somewhere between a nervous laugh and a moan. He pulled his head back a little at the same time as he flexed his hips to push into Parker’s touch.

“Shh,” Parker soothed. “I’m not going to hurt you.” Placing his thumb under Josh’s chin, he held his head in place. Parker let his gaze wander from the lovely brown eyes to the full, moist lips that were parted just a little, so invitingly. Lowering his head, he brushed a first gentle, tentative kiss on Josh’s startled mouth. When Josh didn’t exactly respond but didn’t pull back, either, Parker took it as the permission to go further. He found Josh in a second, more intense kiss. This time, he didn’t settle for just a brush of lips. He caressed Josh’s bottom lip with his tongue before he licked that little cleft at the corner of his mouth then, at last, dipped into the sweet, velvety opening. Josh tasted nice. Minty, clean, and so excitingly new. Fresh and pure, and nothing like the shady figures Parker normally did this kind of activity with.

Parker explored the inside of Josh’s mouth and trailed his tongue along the sharp ridges of teeth to where Josh’s tongue waited to be awoken from its slumber. Josh responded at last. His kiss was still reluctant but all the sweeter for its shyness. Parker groaned into their kiss. This was good, but it wasn’t enough. Leaning back a little, he nibbled Josh’s lips briefly then started a trail of tiny kisses along Josh’s jaw to his neck. Josh shuddered delicately, and Parker felt goose bumps rise under his touch. He gripped Josh’s earlobe with his teeth, biting gently and drawing a choked moan from Josh. The sound was lost in the silence of the kitchen, but, at last, Josh leaned into Parker’s hold. Parker kissed a line down Josh’s neck to his collarbone, as always a little disconcerted when he felt the pulse under his lips. This one was strong, so full of life, and undeniably excited.

Still holding Josh’s head in place with one hand, Parker started investigating Josh’s lower regions. When his fingers brushed Josh’s fly, he was pleased to feel the hard bulge of an erection behind it. Cupping it, he gave it a teasing squeeze. Josh moaned and melted against him. Parker undid his fly, swallowing whatever weak attempt at protest Josh made in another kiss.

Thanks so much for the great post, Sage! It was a pleasure to have you @ BRB. I wish you the very best for the future. ~ Blak Rayne