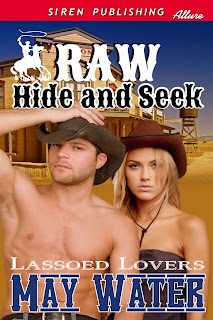 Welcome to Summerville, Colorado. An Old Western town full of love, passion, and heartache. Meet spunky Maddie, horseman Parker, and bad boy Romney. A love triangle that leads to violence and a game of hide and seek. Add sensuous school mistress Trina to the mix. Who will lasso Maddie’s heart?

Parker sucked in his breath. “You don’t have to, Maddie,” he whispered. Maddie gave him a wry grin. “I know that. I want to. Now unbuckle your pants before I rip them off you,” she snapped. Parker immediately unbuckled his pants and she tugged them down roughly. As soon as she saw his cock her mouth enveloped it. She loved when it was small like this. She was able to fit the entire thing in her mouth. It began to grow quickly. She grasped the base and began bobbing her head up and down.

“Oh God, yes, Maddie,” he moaned as he stroked her hair. Maddie glanced up at him and she was pleased. He was leaning against the tree with eyes closed, very much enjoying himself. She quickened her pace, licking and slurping in a most unladylike manner. When she shoved the full length of his dick down her throat, he cried out with pleasure, tightening his grip on her hair. She felt a stirring in his balls when she cupped them lovingly. Parker bucked his hips, moaning loudly. Then quite suddenly he pushed her head away. Within seconds he was on the ground with her, grabbing at her roughly.

“Bend over,” he panted. Maddie’s excitement sky rocketed as he began tugging at her pants roughly. She barely unfastened them when he pulled them down. He leaned over, bit one ass cheek, and then slapped it hard.

“Fuck me. Fuck your wife,” she said hoarsely. Parker leaned on her back. His cock bumped into the back of her thigh before it slid into her wet cunt. She moaned loudly as he grasped her hair, sliding in and out deliciously. She pushed back into him roughly, encouraging him to pick up the pace. When he began to pound faster, she thought she would pass out with joy. She grasped the tree trunk as he pounded her. Parker slammed into her forcefully. Within moments he tensed and cried out.

“Yes, yes!” he cried, pushing into her as far as he could. Maddie bit her arm as he came, relishing the feel of his cock expanding and constricting inside of her. He let go of her hair as his strokes slowed. She could hear his breath coming in short gasps. Then he leaned on her back and kissed her ear.

“I love you,” he whispered.

Maddie bumped back on him gently and wiggled her rear. “You’d better,” she whispered back. Parker chuckled as he slid out of her. She moved on her back and gazed up at him, shielding her eyes from the sun with an arm.“I love you, too,” she said with a small smile.

“Hey, I think we just christened our bedroom.” Parker said with a smile.

“And just think, the house hasn’t even been built yet,” she said. They both laughed. Maddie wasn’t really sure why was so funny. But it was.

BALLS TO THE WALL DETECTIVES INC.

Love Beyond all Dimensions Series:
MAGNIFICENT KING
SPIRIT TWINS
IN THE BEGINNING
STEAMBLAST FROM THE PAST
QUEEN MARYMARY