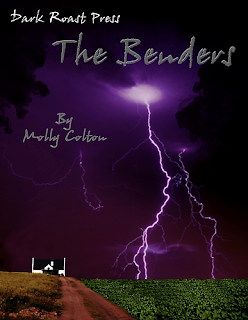 'Griffin used his paranormal power to control women.  Part of him knows it was wrong, and now he wonders if he deserves anything deeper than the meaningless sexual encounters he’s always reveled in.'


Bender, a Fallen One, finds himself in love with a mortal, Georgeanne Quade, and produces a son named Griffin.  All three have an extraordinary power: bending others to their will and altering the weather.  But for Griffin, this power is a curse.  Too often he has used it and results turned out badly.  When he falls in love with Bithia Sibbings, he tries hard to become a better person, and ignore his often spontaneous urge to use the ‘gift’.

Bithia falls quickly for Griffin too, but her parents will not stand for it.  Over the years they have enjoyed gambling and extravagance, and now they are in financial straits. They even lost the deed to La Gema del Sur, their ancestral plantation home.  In order to regain ownership, they expect her to live with the Walkinshaws, a wealthy, childless couple in New York City.  And this move means providing more than just companionship.  Bithia is abhorred by her parents expectations, and refuses.  But Bender is on the sidelines, and coercing her to agree to their wishes.

Bender is never far away. His one desire is to gain mortality, so that he can be with Georgeanne at all times. Seen only by she and Griffin, he does everything to instigate his son’s wrath.  He believes Griffin can make him mortal.  The only way is to incite Griffin: toy with those closest to him, and force him to bring that power to a massive surge.

“You cannot get rid of me,” Bender said behind him.

Griffin’s muscles tensed and his hands formed fists.  “You son of a bitch, show yourself!”

“What will that accomplish?”

“I might know what you are,” Griffin snapped, turning to find the source of the voice.

Griffin hesitated.  Then it came to him with clarity.  There was no doubt in his mind what he was dealing with.  “You’re a Fallen One.”

“What is your name?”  Griffin continued.  The more he learned, the better his chances to fight and win.

“There are six of us. We were the last to fall, and of so little importance, they did not give us names.  We chose our own.  For thousands of years I was referred to as the Silent One.” He moved a step closer. “We are benders. We have the ability to bend life and nature to our will.”

“Why have you remained here?”

“I told you, I love Georgeanne.”

“That’s not possible. You can’t love.”

“How would you know?  You fight your own emotions.  You hardly recognize anything genuine. Do not tell me what I feel.”

Genuine?  What a horrendous load of shit!  “You’re not mortal,” Griffin averred with accuracy.

“No, but I wish to be, and you could make it possible.”

Griffin scowled at this.  Preposterous!  He could not make a man of a devil. What trick was this? He had definite abilities but this was beyond his expertise, and he wouldn’t try, if he could.

“You will eventually,” Bender said.

“Looking to redeem yourself in the eyes of God?  Will a life of mortality earn you forgiveness?”

Bender hesitated.  “If you can be forgiven, then so shall I.”

Did he need forgiveness and redemption?  He did not deliberately destroy people’s lives.  They were accidents.  The effects of gross mismanagement of energy he found difficult to bridle.  He had tried so hard to help others, and it became twisted and dangerous, but it was not his intention.  Control it?  How?

“Why should I help you?”  Griffin asked at last.  “Why should I care if you become mortal?  Mother may keep you around, but eventually she will die, and you will be deserted and alone.”

Another moment of silence.

“You hear the creaks and groans of Bassage Hall?  Those are your ancestors.  Eudora and Peter.  Tessa, Viola, Bernard and others.  They are trapped here until I allow them to leave.  I may do the same to your mother when her earthly life is over.”

“You call that love?” he snapped.  “If she is so important to you, why keep her prisoner for all eternity?”

Bender did not answer.

“Talk to me, you foul scum of the goddamned earth!”  Griffin paced the greenhouse floor, looking around for Bender.  “Show your miserable face!”