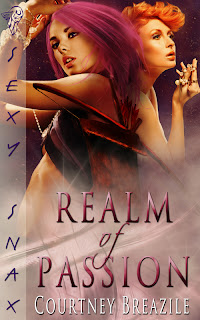 Tell us about yourself.
I am a mother, teacher and writer residing in North Idaho. In my rare “off” time I like to soak up the sunshine while it’s here and travel anywhere and everywhere. I feel like everything I can possibly experience in real life will only make what I write better.


Where and/or how do you find the greatest inspiration?
I find it everywhere and any time. Sometimes it is something/someone I see and sometimes it’s a fragment of conversation I hear. There is a possible story in everything if you have the ability to twist the normal every day stuff into something a bit more exciting!
What made you chose to write erotic literature in particular? Is there any other genre you’d like to write? And, if so, why?
I started out writing more sweet kinds of romance but as I played with a little more erotica in the stories I found that I really liked it so I quickly started writing erotica over romance. I also enjoy writing horror and would love to someday try and write some YA fiction.
What’s the hardest part of a novel for you to write: Beginning, middle and/or end? Why?
The middle is often difficult, seems like I often hit a certain point and my motivation is sucked out of me. Luckily I usually find it and finish the thing.
Has your own life influenced your novels? And, if so, how?
I don’t think so. I don’t feel like I write about people I really know. Sometimes I write of places I know however, so in that way perhaps some minor influence but still not a major influence from real life.
Writing sex/romantic scenes can be a challenge for some authors. Do you find it difficult? If yes, how do you compensate? If no, where do you draw your inspiration?
No, I have never found it difficult to write sex scenes, romance is sometimes harder to write actually. I find inspiration in my mind, same place I find inspiration for the rest of the story. I feel like it all comes from the same place.
Who is your favourite character, which you’ve created? And, why?
Its hard to pick I fall in love with my characters whenever I write their stories but some do linger more than others. My vampires in my Immortal Council series hold a special place in my heart for sure. I think its because I have spent so much time on them with the series and still looking forward to more stories with them around.
Tell us about your newest release.
I have been releasing a lot of lesbian fiction lately. The last book of mine to be published was Realm of Passion at Total-E-Bound. It is a short fantasy FF story about a fairy and a human who is unlucky enough to be “possessed” by a kind of magic that the fairies and demons are fighting over. It was a very fun one to write. I have a lesbian series coming out through Total-E-Bound starting early next year with South Beach Rookie. It is a contemporary FF series revolving around the lives of an all female fire fighter house. Lots of heat in these stories.
Just for fun–
What is your favourite colour? Clear!
Which do you prefer a great hero or a great villain? That’s a tough one. I sometimes like a villain more than a hero, I like the flaws I think.
What is your favourite movie? And, why? Don’t really have one. I love comedies and horrors and such. I don’t like sad movies/books other than that I am not really picky.
If you could be anyone in the world who would it be? And why?
Me! Because I am awesome, of course….
Where do you see your writing career in the next five to ten years?
Hopefully it is strong and still as fun as it has been in the past.

Blurb:
Callie’s body is the perfect hiding place for the magic of the fairy realm. Malia is the perfect guard for her body against the demons determined to have the magic for themselves. Malia can’t resist the magic—it calls to her and Callie’s body is as close as she can get to it. Surprised to find the body so welcoming, Malia refuses to give it up once she has it. Is their attraction enough to break the rules of the fairy realm?


Malia pulled out a carton of strawberries and popped the lid. “These looked especially good, very ripe though so we probably need to eat them right away.” Malia pulled out one plump red berry and leaned toward Callie, holding it out to her, brushing it against her lips.
Callie couldn’t resist the invitation, she licked her lips and opened her mouth, taking the sweet berry into her mouth and biting it. “Mmmm, that is delicious, perfectly ripe I would say.”
Malia licked her lips, her gaze glued to Callie’s mouth. “I thought they might be. Here try another.” Malia pulled out another berry and moved closer to Callie.
Callie’s heart began to pound and her body heated. Malia hopped up on the table and held out the strawberry, sweet red temptation. Callie moved in front of her and Malia spread her legs, welcoming her closer. Callie didn’t hesitate, she moved forward until she felt Malia’s leg against her own and the strawberry was in her mouth.
Callie resisted the urge to moan as the berry filled her mouth and Malia’s thighs pressed gently against either side of her.
Malia leaned forward slow and purposeful, until her lips touched Callie’s.
Callie wanted to melt as soon as she felt Malia’s soft lips on hers. They were gentle and demanding, forcing Callie’s to part and allow her tongue to slide past. Callie hesitated only a second before moving her tongue against Malia’s, tasting her. It was intense, more incredible than anything she had ever experienced, like licking pure sex. Her body filled with it as their tongues mated and she felt her panties dampen in reaction.
Callie slid her hands up Malia’s thighs, her thumbs caressing so close to Malia’s cunt. Callie shivered as Malia’s hands grasped her ass, pulling her roughly forward until their bodies were pressed against each other, Malia’s hard nipples pressing through her clothes and enticing Callie, begging to be caressed.
Callie broke the kiss, breathless and panting. She looked into Malia’s eyes but couldn’t decipher what was going on in their clear blue depths.
“You’re right, they are sweet,” Malia whispered, a little breathless. She picked up another berry and bit into it, a drip of the juice ran down her chin.
Callie leaned forward quickly, catching the drip with the tip of her tongue and licking up to Malia’s lips. She pulled back as Malia swallowed. “Too good to waste a drop,” Callie whispered, unable to help the grin on her face.
Purchase: http://www.total-e-bound.com/product.asp?P_ID=1610
Publisher: www.total-e-bound.com
Thanks for stopping by, Courtney! All the best! ~ Blak Rayne
Posted by Blak Rayne Books Blog at 12:09 AM