Welcome to BRB, sweeties! It's the end of August (hard to believe, isn't it), and a Friday, which means FFAF (free for all Friday). So I can post anything I want. And since I just finished reading another novel yesterday, I decided to write a review.
I don't know what guidelines other people follow when they write reviews, but for myself, I have one golden rule… For every bad point, there must also be a good point. In other words, if I claim there is something wrong with a novel, I must also say something good. And if I can't say anything good at all, then I'll nix writing a review altogether and post a star rating only–thank goodness this doesn't happen too often.
I’m positive after reading the aforementioned you damn well know what I’m going to say next.
*sighs* 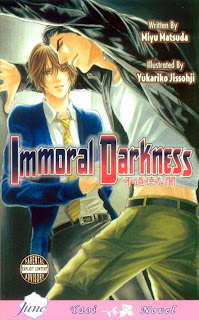 Immoral Darkness, written by Miyu Matsuda and illustrated by Yukariko Jissohji, is a yaoi novel published in North America by June Manga.
First, I’d like to say that it isn’t uncommon for yaoi stories to have a teacher attacks student theme. It’s popular and, it sells, especially to the younger, female populace in Japan. But it isn’t near as marketable with the mature readers like myself. A plot like this is predictable and riddled with non-consensual sex scenes, which can almost border on illegal–depending on the characters ages. But then I would be comparing apples to oranges, as to what white and Asian cultures view as acceptable reading or viewing content–a topic that I refuse to discuss. Anyway, I think you get the gist.
Here is my brief synopsis. High school student Shiina Jun is beautiful and intelligent, but also emotionally inept and alienated from parents and brother. Every female student wants him and so does his math teacher Sasagawa Tetsuya–to be blunt, a walking pedophile that preys on young girls and Shiina. Sasagawa can see Shiina is depressed and has issues in regards to his home life; he takes advantage, using Shiina’s unstable psychological state against him. Basically, the attractive semi Sasagawa uses every means necessary–the man is manipulative to the extreme. He rapes, threatens, embarrasses, lies to and bullies Shiina until his seventeen-year-old mind can’t take any more. In the end Shiina truly believes he’s brought the misery upon himself, accepting that in some twisted way he loves Sasagawa and the man loves him. 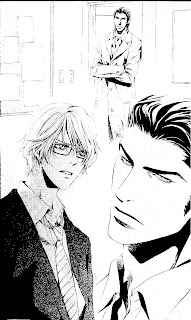 Okay, now for the good stuff.
Did I like the book? No. Perhaps if Sasagawa had of shown a little mercy, even then it’s doubtful. The editing is awful; this yaoi was lost in translation. The over all writing style seemed disjointed and confusing, in particular the dialogue. And the descriptive words were at times used in the wrong context. As for the plot, well, predictable and boring.
Is there anything I liked about the book? Yes! The illustrator did a great job. The characters were beautiful and matched the author’s description. The POVs were distinguishable. Shiina’s thoughts and feelings were well voiced–I could identify with his pain. The author has a good imagination, but needs guidance.
So there you have it–my tit for tat review! I give Immoral Darkness a 2 star rating–the sex included, which wasn’t pretty. Sadly, I must say, read at your own risk.
Happy Yaoi Hunting!
Blak Rayne
Posted by Blak Rayne Books Blog at 11:30 PM