Writing Women with an Edge ~ BLMorticia 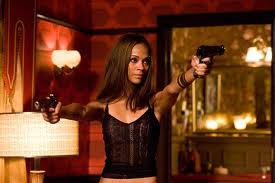 Greeting readers! This is BLMorticia, you know the snarky muse of Sharita Lira. Just in case you don’t know me, I’ll have a small bio at the end. *grins* What am I talking about today? The women I write in my books. Well, I haven’t wrote many since most of my books have been m/m but with my first m/f release coming out in June, I decided to chat about my fab heroines who are no nonsense, fearless, fun and of course SEXY!

My character in Losing my Inhibitions is a lady cop who’s looking for a man on her own time. She’s cautious, likes to be in control, and refuses to go the conventional route to meet her desired lover. She reminds me of the lady up above from a movie I sort of liked called Losers. One of my fave actresses Zoe Saldana played Aisha who’s a double agent in the movie. The scene with her and Jeffery Dean Morgan in the beginning was totally kick ass. In short, they fought and she more than held her own against this man even though he was about twice her size.

The age of dainty, weak women are gone. Sure there still are a few movies that like to cast a lady who’s overly emotional, a drama queen, and couldn’t stand up to anyone in a fistacuffs but most films like the ladies to be badass and in Losers as well as her other movie, Columbiana, Zoe takes no prisoners.

Getting back to my book, Miss Vanessa Daniels would be that woman. As I said earlier, she likes to take control in all facets of her life. Despite what her friends, both male and female, tell her about her methods of trying to meet her ideal mate, she’s stubborn and decides to try meeting a man online. When she seems to have met the man of her dreams, she still wants to proceed with caution and not let go of the reins.

Will she do it to get the man she wants? And when she gets him will he do what her heart desires? Check out the blurb and excerpt from my humorous book with some romance and hot sex! 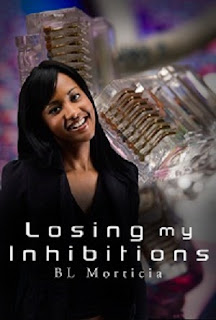 Officer Vanessa Daniels is fast approaching her 35th birthday which also happens to be on Valentine's day. She seeks a specific kind of man to be her lover and likes being the one in the driver's seat.

Jayson Freed is a bartender by day and a writer by night. He's looking to find the right woman to help fulfill some of his inner most fantasies. The two meet on an internet dating site and immediately start talking. Will the connection work? Will Jayson turn out to be just what this hard nose girl needs?
Unedited Excerpt PG

A week and a half had passed and “Booklover” became Jayson Freed, an author who lived on the north side of Chicago, near North and Damen in the very popular Wicker park neighborhood. Jayson worked part time as a waiter at one of the up and coming restaurants/clubs called, Vision. He’d been employed there since it opened in July of 2009.  Jayson wrote romance, ménages, kink, which I loved. His tastes in music were very similar to mine, a little bit of everything with a preference towards rock music. On the surface, he seemed to be exactly what I wanted, even without the background check. I felt like I already knew him, and the more I spoke with him, the more I wanted to take him.

Now, I’m ready to exchange phone numbers and get a lot closer to my seemingly perfect match. I needed to hear the voice that went along with all that smooth and sultry wordage we’d exchanged in the chat room. Being an author, of course he’d be able to turn me on. I could imagine speaking to him live would be even more of a treat.

Jayson left me an email saying to meet him tonight in the same room so we could talk a little more. I wrote back and told him lets chat by phone instead but he didn’t respond. I didn’t want to sound desperate, so I did what he asked and hoped he would want to do so after our talk tonight. I know I could’ve waited for the check to come back to get his digits but how would I be able to explain that.

After I ate my leftover Chinese, I sat in front of my laptop, waiting for his message to pop up. The anticipation of meeting this man killed me. I hoped we could get this ball rolling once we’d had a couple of conversations by phone. Within a minute, the window popped with the link which I clicked on immediately. The chat started with the pleasantries and then he went “quiet.” I decided to just come out and say it. The worst he could say was, not right now, or flat out no. However, I thought we’d made enough of a connection that he’d go on and give me what I wanted. I had no reason to believe that he wouldn’t.

I typed in the words.

LawGirl: Hey. In my email earlier, I asked you if we could chat by phone. Can we exchange phone numbers?

BookLover: I saw that and was a little taken aback. Are you sure that you want to?

LawGirl: Why wouldn’t I be? J

Seeing that, I chuckled. Occasionally, you’ll find men like this that like to play by the rules. Obviously, Jayson’s outgoing personality came out in his books and not in his personal life.  I shook my head, and finished typing.

LawGirl: Well, I’m comfortable giving you mine now. Besides, I need to hear your sexy voice. The words you put on the page have gotta sound hotter coming from your mouth.

Booklover: *g* Maybe. You’re quite the charmer. Even though we’re in a private room, I don’t want to type it out.

LawGirl: I hear ya. Let me message you mine and you call me back okay?

I stopped typing so I could click on his moniker. As I put in the digits, the nervousness grew a little. Finally, I’d be talking to the man that had me running home to my computer just about every night. Due to his late schedule at the club, he’d be getting home around two or three just as I did, since me and my partner were on third shift at the moment. I’d been primed and ready to talk with him as soon as I got in the door. Now, that we exchanged numbers, there wouldn’t be a need for the computer. Jayson and I would finally talk. Hopefully we’d continue the connection and become closer.

When I dialed the number, seemingly I couldn’t go fast enough. My stomach churning and heart beating fast, I’d never had this many jitters in my life. After three rings, he picked up.

“Hello.” The voice, a lot deeper than I expected; not quite Barry White, but damn near close.

“Hi, Jayson, It’s Vanessa.” I plopped on the couch after I turned my computer off.

“Hiya. Well, you sound very sexy on the phone. I’m sure you look even better.” I could hear his grin through the receiver.

“Well, thank you.” I twirled my black curls around my fingertips. “I feel the same way about you. I’m glad you agreed to talk to me.”

A small pause. “Why wouldn’t I? We’ve been hittin’ it off in the chat room, not to mention, gettin’ off.” He laughed once he completed the statement.

I spread my legs out on the couch. My fingers were right at the waistband of my sweats. I wasn’t wearing any underwear, already prepared for some hot phone sex. I giggled, “Yes we have. Tell me we’re gonna do that some more tonight, Jayson.”

“We are, Vanessa and I must say, hearing you speak to me adds to my arousal.”
“Same here.” I slid my pants down from my waist before massaging my clit. “Tell me a story, would you? I need a release.”

“As you always do, baby. What kind? The ones where the woman’s in charge or the man?”

“You know me. I like it where the woman has the control.” He hadn’t even begun talking dirty but my folds were already moist. I had to have him, sooner than later. Where is that damn background check? I didn’t want to go into this not knowing if there as danger involved. Even though he sounded harmless on the phone, I just couldn’t proceed blindly.

Jayson Freed just had to be the chosen one.

Thanks so much for the great post, BL. The book sounds awesome. :D ~ Blak Rayne
Posted by Blak Rayne Books Blog at 11:30 PM