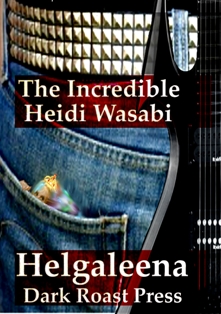 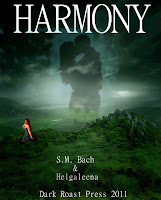 Website Link: Helgaleena!
http://www.myspace.com//helgaleena/blog/545874957
http://helgaleena.blogspot.com
http://www.darkroastpress.com
The Incredible Heidi Wasabi
Blurb:
Shakti or succubus? Faithful spouse or figment of the imagination?
Whatever she is, Rufus and Steen would not have made a grand success
in their chosen profession, as the stars of the heavy metal band
Virgen Steel, without Heidi. And they probably never would have gotten
married - to each other, anyway. This is their incredible story.
Excerpt:
'It didn’t come as a great surprise to Herren when one of those drunken spats among the cigarette butts and puddles of beer in the wee hours got them both hard. But Dixon was looking at him like he’d never seen him properly before. He was merely shaking Steen, not pounding him on the bar floor any longer. Blue and hazel-green eyes, one rapidly swelling shut, managed to meet and lock for a crucial second.  It gave the bouncer an opportunity to grab hold of them and throw them both out.
Once they were both on their feet in the alley, Steen pulled Rufus up by the leather jacket and kissed him, kissed the taste of his own blood off Rufus’ teeth and let his lower lip be seized and savaged by the singer’s massive jaws.
My man was in shock. Sure, Rufus the Rude had enjoyed both girls and boys in all his years with bands. But why was he sparking with Steen? The guy had three kids with Anna and another on the way.  Yet there was more to Steen than most knew. Rufus had been to his Solstice services. The man was even consultant on that horror film Lunasad. That’s why he’d asked his advice on ‘astral beings’, trying to get a handle on what I was. Did Steen really want to do this or was he just trying to keep the Virgens from splitting up?
So he was tempted to use that reddish goatee for a handle and pry open Steen’s mouth but he did not. He let the kiss take its course and the fire it wanted to start die down. He was breathing like a bellows but he backed off.
Steen showed that he was a mind reader on top of everything else. He drew away too, when the stubble on Rufus’ cheek went combing though his little beard in reverse and their lips fell apart.  “Don’t worry; Anna isn’t jealous about men,” he murmured then, and his split lip curled wryly into a smirk. His hips rocked hard into Rufus and rammed their cocks together.

That did it. Rufus grabbed his ass and spun with him, up against the filthy brick wall, taking more skin off his knuckles and trying to hammer them into Steen with himself.  The Dane grunted and bucked them outwards again, hard enough to bruise, whereupon they began to rut until they were both trembling and wet like spent racehorses. Never even got their pants open.
I know. I was watching. That led to a time where Rufus didn’t see me much, even in dreams. But I wasn’t afraid of losing him like some meat woman would be. There’s only one Heidi. And I was still learning about myself and what I could manage in this world. Like getting around on the Internet. My goodness! If I was seeing to Rufus all the time, when would I blog? '