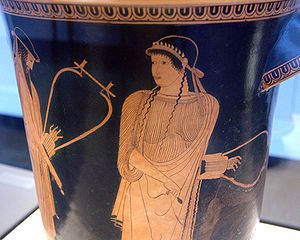 Born on the island of Lesbos in ancient Greece, somewhere between 630 and 612 BC, the lyrist poet Sappho, was an aristocrat, who married a successful merchant Cercylas, had a daughter Cleis, and lived a fairytale existence. Due to her husband's wealth and status, Sappho was able to choose any life style, and for her, she whiled the hours away studying the arts on the isle of Lesbos.

Lyrist poetry is poetry to be performed with an accompaniment of a lyre. In Sappho's case, she composed her own music, refining the prevalent lyric meter to what is now known as a sapphic meter; sapphics are made up of any number of four-line stanzas (*Dictionary: group of lines that form the basic recurring metrical unit in a poem or verse). I won't delve any deeper into poetry as there is so much to learn, but I will say Sappho was a greatly admired lyrist, whose poetry was melodic, thought provoking and sensual. Much of her work was written from a personal standpoint, how she was affected by love and loss within her own life. She was uninhibited and bold, feeling little shame for her thoughts and feelings. It is believed that there were nine volumes of Sappho's poetry at one time, intact and complete. But not much remains of her works today; unfortunately most is in fragments. 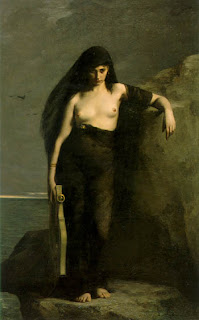 The common theme of Sappho's affection, voiced in almost all her poetry, was her attraction to women, frequently those sent to her for education in the arts. Sappho wrote very openly of her love and adoration for these women. Homosexuality was accepted in ancient Greece, actually more so than today, and even though there was strong homoerotic content in her poetry, she was honored and proclaimed a master of her craft. Of course, centuries later, her work was condemned by scholars, probably those fearful of the homoerotic undertones, which also stemmed from Sappho's supposed personal history. In the last hundred years, Sappho has become synonymous with lesbian and sapphic; both words originating from her name and assumed sexual preference. Adding to this speculation, any information that has been obtained in regards to her life, whether hypothetical or not, seems to be written by her own hand, hidden within the stanzas of her poetry. I would think that this assumption is accurate, considering human nature and how authors create; we usually write what we know and what is closest to our heart. Whatever this Greek lyrist's choice of love interest, one thing is for certain, she was a well-respected and highly talented woman in her time, praised by the likes of Plato, and obviously not soon to be forgotten.

Awed by her splendor

Awed by her splendor
stars near the lovely

moon cover their own

is roundest and lights

earth with her silver

I hope you enjoy the weekend, sweeties! The weather has been great where I am, very sunny and gloriously warm. My tomato plants are doing awesome. Until Monday, take care!
~ Blak Rayne
Posted by Blak Rayne Books Blog at 11:30 PM