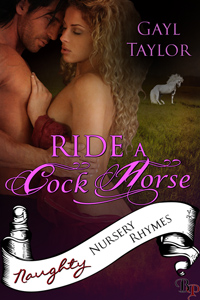 Tell us about yourself.
I am a mom to three sons and a crazy cat named Ozzy. During the day I work in the biotech industry as a systems analyst. At night I write sensual contemporary romance. I've been writing for as long as I can remember and dreamed of one day being published. I always had an active imagination, was always lost in some daydream or living out fantasies. A few years ago, I got more serious about it. My debut as a published author was in May with Breathless Press.

Where and/or how do you find the greatest inspiration?
There are many things that inspire me. Sometimes music will spark something that I will explore. Many times, I use my own experiences. I get that "What if…" moment and start writing. Love is such a powerful emotion. It's very inspiring for me. My first book, Ride a Cock Horse, was inspired by a nursery rhyme. Since I was writing for the Naughty Nursery Rhyme line at Breathless Press, it seemed like a great choice.

Which appears first when contemplating a new project: A character, the plot and/or the title?
It can be any of the above really. Most often I am inspired by a character. I get to know them, find out what their story is, and write it. Occasionally I get that "What If…" idea. The story develops first and then I add the characters. Then I take the time to know who they are and what makes them tick. The characters are what drives the story for me. I never come up with a title until I know what the story will be.

What’s the hardest part of a novel for you to write: Beginning, middle and/or end? Why?
I struggle with the endings. I am a pantster despite my efforts to change that. I get 2/3 of the way done and hit the proverbial brick wall. I've been trying to outline the whole story before I begin but that is no guarantee I will get the ending right. Those pesky characters always throw me a curve.

Has your own life influenced your novels? And if so, how?
Pieces of my life and experience will find its way into my writing. I began to write, after a long hiatus, to work through some tough emotional times I was going through. I've used those experiences and the people involved to shape stories and characters. I will infuse some aspect of me or my life or emotions in each character and each story.

Writing sex/romantic scenes can be a challenge for some authors. Do you find it difficult? If yes, how do you compensate? If no, where do you draw your inspiration?
I thought at first that writing sex scenes would be difficult but the sex itself isn't so hard. Getting the right emotions involved, the right mood is key for me. It is draining at times. And then there is the bit about getting all the body parts in the right places so I play out the scenes in my head to make sure it doesn't come off as impossible. I draw on my own experiences too, what I like, what I'd try.

Do you have a method you use to write the sensual parts? Do you prefer the sex to be open and bold? Or left to the imagination?
I have an open door policy with my sex scenes. It doesn't work for me to close the door on sex. It is such an integral part for the characters and the story that it should be shown. Showing what the characters are feeling, the way they express their love through their sensuality and sex is important to me.

Who is your favourite character, which you’ve created? And why?
I adore my male characters. They are strong, flawed, and very real. My female characters are by no means helpless, have flaws, and quirks that can mirror some of my own. I have a character in a WiP that is a particular favorite. He is based on a real life person and we will have to leave it at that. ;)
Tell us about your newest release.

My newest release, Ride a Cock Horse, is based on a nursery rhyme. Hunter and Kate, are childhood sweethearts and musicians. His addictions broke them up but he returns after cleaning up his act to win her back. She does not fall into his arms at first glance. The message in the book is about forgiveness and acknowledging that people can change.

What is your favourite colour?
That changes regularly but right now it is green. Earth tones basically.
Which do you prefer a great hero or a great villain?
I adore the bad boys with the heart of gold they keep buried. A lot of my heroes have a darker side.
What is your favourite movie? And why?
That is a tough one. One of my favorites is The Wedding Date. If you haven't seen it, I'll give you some background. A young woman is attending her sister's wedding and her ex-fiancé is going to be there. She hires an escort to be her date. Deborah Messing and Dermot Mulroney are the leads.
If you could be anyone in the world who would it be? And why?
I can't think of anyone I'd like to be however I wouldn't mind trying on some different roles. I could be a rock star, a race car driver, or a famous author!
Where do you see your writing career in the next five to ten years?
I would definitely like to have several more books published. It's hard to say really. I just want to keep doing what I'm doing. Hopefully, I will be in a position one day to do it full time and not need that day job.

Blurb:
Musician Hunter Blake returns to Banbury Cross to win back his true love, Kate. Will they find a way to make beautiful music again?

Not even a cock horse could bring musician Hunter Blake back to Banbury Cross, yet here he stood, ten years after leaving, to make amends for his past behavior and win back his true love, Katherine Banbury. Their relationship was in perfect harmony until Hunter's excessive drinking tore them apart. Now sober, he's focused on doing whatever it takes to prove he's worthy of her love.

Kate spent the last ten years determined to forget Hunter. With a developer intent on turning her ancestral home into tract housing, Kate had her hands full. When Hunter returns, vivid memories of their passionate history stoke the flames of desire between them. Will Kate fight the attraction or will she open her heart to love once more?
Excerpt:

He pulled her against him, dipped his head until his mouth found the sensitive area behind her ear, and kissed it. His erection pressed into the small of her back as he pulled her closer. With his left hand, he unfastened the clasp at her neck while the hand that held her moved lower until it found the soft flesh of her thigh. Slowly, he began to caress her, higher and higher, as the top of her dress fell to her waist and exposed her bare breasts. She should have protested, but it felt so good, so right. No one made her feel like this and, as hard as she tried to find someone else, it had always been Hunter's touch that made her body respond.

Kate leaned back so that her head rested on his shoulder. Closing her eyes, she savored each caress as her body naturally responded to his touch. Wet heat pooled between her legs. She ached for him, wanted him to soothe her need and, just when she made up her mind to demand it, one long finger and then another parted her folds and slid inside her. She trembled with desire as his palm worked slowly against her clit while his fingers moved in and out with slow precision.

"You remember that time at Rocky's when you rode that mechanical bull? That was such a turn on; I was so hard watching you that night. Ride my hand, Kate, like you rode the bull." His voice, rough and laced with desire, rumbled against her ear.
Purchase Link: http://www.breathlesspress.com/ride-cock-horse

Thanks so much for stopping by, Gayl! It was great to have you here. I wish you the very best for the future.
~ Blak Rayne