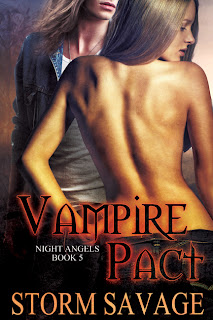 Website: http://NightBrigade.wetpaint.com
Vampire Pact Night Angels Book 5
Blurb:
Booker and Zoe face unexpected challenges when a new vampire sect rides onto the scene. The war with Black Star has taken its toll on their relationship. When a merger is necessary to save her clan, the two lovers struggle to hold on. A shocking appearance from the past puts their love to the ultimate test. Can they find their way back to each other when fate pushes the limits? Will Zoe be able to forgive Booker when a ritual goes too far?
Excerpt:
Booker covered her mouth with his in a kiss laden with hunger while Rider buried his face against her neck. Frantically she began tearing at his clothes, first the half-opened shirt then the fly to his worn jeans until he was naked. All the while Rider continued caressing and kissing any inch of skin he could reach while pulling off her clothes.
She turned to him with the same urgency, pushing his silky tee shirt up and over his head then urging him to shed the leather pants. Booker’s sensual lips trailed down her back as she kissed her way down Rider’s chest and over the rippling abs. Free of their clothes at last, the three of them knelt entwined on the rug.
“Sweet, sweet baby.” Rider sighed and let his head fall back as her teeth nipped at his neck. “Take your fill, I long to feel your bite.”
Before engaging in another bite she glanced back at Booker. His eyes shimmered with astounding love and he gave a sexy wink that fueled the ache between her thighs.
“Make love to me, baby,” she pleaded. “I want to feel you deep inside while I take Rider’s blood.” Her gaze shifted back to Rider. “I need you both more than anything right now.”
“No worries, doll.” His alluring eyes drew her into their dark depths. “I understand that we must take it slow for a while. You’re in good hands, my sweet.”
Tears blurred her eyes momentarily. His words touched her. Their overwhelming affection warmed her soul and she felt the ice of sorrow melt away for the time.
Booker’s arms encircled her waist as he eased into position behind her. Lowering his head to the curve between her neck and shoulder, his hair tumbled forward sending a cascade of silky spirals over her breasts. Strong yet gentle hands moved up her midriff then higher to caress her breasts and tease the nipples, making them tingle. She waited until his hard length slid between her thighs before leaning toward Rider again.
“Ohhh yesss…” She couldn’t halt a long moan of pleasure as hard male sex filled hers. It had been too long since joining with them.
Rider released a feral groan as she bit down hard. His blood spurted into her mouth and she felt his erection press firmly against her belly while Booker settled into a steady pace of thrusting in and out. Self-control dissipated quickly among them due to lack of recent action. Sucking greedily at her dark-haired lover’s neck, she spread her legs wider for deeper penetration from her alpha male.
Sandwiched between them and wrapped in a tense embrace, she climaxed quickly and shuddered with release. She lifted her head to gaze at Rider while Booker continued driving his awesome self into her throbbing sex. Her tongue swept over parted lips seconds before Rider swathed them with his, thrusting his tongue to the back of her throat.

Purchase Link: http://www.extasybooks.com/index.php?route=product/author&author_id=942
Thanks so much for stopping by, Storm! All the best! ~ Blak Rayne
Posted by Blak Rayne Books Blog at 11:30 PM